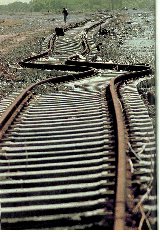 The answer: Not without a massive infusion of new subsidies, in addition to continuing the present level of taxpayer-provided money. At present, nearly 40% of Amtrak's operating expenses are covered by the largess of the U.S. taxpayer. Even with this level of support, Amtrak can expect to lose more than $700 million this year, as none of Amtrak's routes are profitable. (In 2004, the operating losses for all Amtrak routes added up to more than $695 million, with an average loss per passenger of $245.)

How Else Is Amtrak Not Working?

When you consider the price tag for keeping Amtrak afloat, it's hard to support continuing its government subsidy. It becomes even harder when you realize how few people would actually be affected by discontinuing Amtrak's most unprofitable rail routes and redirecting its resources toward achieving sustainable profitability where it could potentially make money. Chris Suellentrop of Slate provides numbers for comparison:

The subsidy from the federal government has another negative effect upon the passenger rail service. It insulates Amtrak from market-driven realities. For example, Amtrak's management structure is highly bloated. Chris Suellentrop notes that the railroad has 80 vice presidents, although it plans to reduce that number to 25. In addition, Amtrak's labor costs (wages, salaries and benefits) are far in excess of the vast majority of other transportation industry workers receive while facing real world competitive pressures.

There comes a time that when a system breaks down, it must be changed or else it will fail entirely. The time for change for Amtrak will come on September 30, when the President's proposed budget for 2006 would discontinue Amtrak's taxpayer subsidy. Far from being a death knell for the railroad, the President's proposed budget marks a wake-up call for Amtrak's management, workers and passengers, who must brace themselves for the changes that will need to be made to make passenger rail service viable in the long term. For the U.S. Congress and the President, no subsidy should be granted to Amtrak without an enforceable guarantee that the railroad will finally undertake the radical restructuring that it has avoided for so long.