Transparency International has released their 2005 Corruption Perception Index, which examines the extent to which corruption threatens confidence and increases the costs of business in the nations of the world. The following map shows how the various nations ranked, with the lightest shaded countries representing the least corrupt and the darkest-shaded countries the most corrupt (countries shaded in gray have no report): 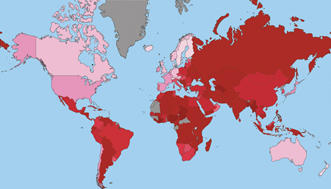 The impact of corruption cannot be understated. Even the notoriously inept and itself-corrupt United Nations recognizes that corruption "affects the poor disproportionately," and is instrumental in "creating inequalities that violate their human rights."

For poor nations, the impact of corruption upon their economic development is well established: the investment that supports economic development is routed away from corrupt nations. As a result, nations that are both poor and have a high degree of public corruption bear a double burden - they lack the capital necessary to alleviate their own poverty and also lack the ability to attract it. Consequently, the people of these nations are condemned to live in poverty and all the afflictions that come with it.

See more at the New Economist, who summarizes the reports findings and focuses upon some of the worst nations. Not to be missed is the New Economist's summary of a related transparency index being developed by the World Bank. (Political Calculations offers a "Do-It-Yourself" checklist based upon the World Bank's proposed index for evaluating whether the government of your interest has instituted basic good governance practices.