Previously, we looked at a study by KPMG that provided a snapshot of the relative costs of launching a new business in several nations, which found the lowest costs of doing so to be in Singapore. But since every business in the world can't locate its new facilities in Singapore to take advantage of its low operating costs (they wouldn't be the lowest for long if they did!), what location-sensitive cost factors would drive a business' decision to pick one nation over another?

Rather than the absolute magnitude of the various cost components for each nation, the key factors that would influence the decision of where to locate a new operation lie in the type of expense and the variation within each component. 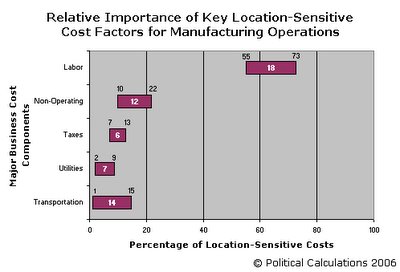 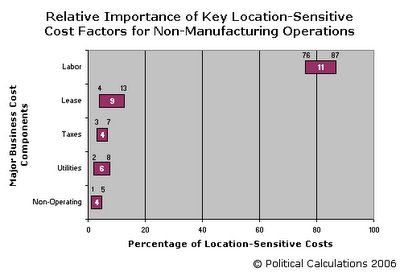 The charts above provide a quick way to see both the full range of the relative magnitude of each of the various major location-sensitive cost components for each of the nine nations of KPMG's study, as well as the degree of variation between the nations.

For a manager tasked with site selection, the degree of variation of the various cost components is what drives the decision to place the business in one nation over another. Here's why: By trading off the options for different locations, the business owners get to better control where their scarce resources go. In this case, the scarce resource is the money the businesses must devote to operating their new facilities.

Why, for instance, would a business select a nation that would require them to pay a higher percentage of their costs in the form of taxes, for which their business might receive very little benefit, when they could instead locate their operation where they may face higher labor costs, but for which they might receive a much larger benefit for the business itself (in the form of actual labor)? What other compelling options would have to be factored into the business' decision making to make the high-tax nation, in this case, represent the best choice?

No one claims this process is easy. There are many factors, both knowable and unknowable, that will determine whether the decision is the right one or not.

If you were that manager, what trade-offs would you choose to make? If you're right, that's great! Fame and/or fortune will be your reward. But how willing to be wrong are you? The wrong choice could not only wreck your career, it could kill your business too!

In the end, it's really just a question of your confidence in your own decision making ability and how willing you are to take a chance. Because if you're that manager and you're not willing to take any risk, perhaps you should consider a different line of work altogether.