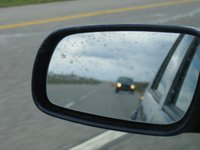 One of the first things that future motorists learn is that they should keep their heads pointed in the direction they’re traveling. They should look forward while driving forward and look behind while driving in reverse. The reason for doing so should be obvious to all but potential candidates for this year's Darwin Award – not watching where you're going is an almost sure way to have all your options expire prematurely.

At least, that's the conventional wisdom. The truth is that there are ways of successfully navigating a vehicle down a road without looking in the direction that you’re going. One could, for instance, focus their entire attention on their rear-view mirror and, based purely upon where seeing where they've been, project where the road is going and set their course accordingly. And this method will work a surprising percentage of the time!

The reasoning above is somewhat akin to Greg Mankiw's recent thoughts on whether the Federal Reserve needs to look ahead in setting its monetary policy. He argues that because the financial markets are forward-looking, that the Fed might not have to be:

Suppose that we get some news that inflation will be picking up over the next few quarters. Under a backward-looking rule such as the one above, the Fed would not raise the Federal funds rate until the higher inflation is realized. Such a delay might seem undesirable. But because long-term interest rates and other asset prices are looking ahead to future Fed actions, they will react immediately. These financial-market reactions will automatically start to put downward pressure on aggregate demand, offsetting some of the inflationary pressure, even before the Fed acts.

In other words, the Fed may not have to focus upon where it's going because the other drivers on the road will attempt to take corrective action first (kind of like the joke about the blind driver who knows to go at a stoplight when all the other drivers behind him start honking and knows to step on the brakes when his passengers start screaming!)

Much like the blind driver, the key to success in using this strategy is for the Fed to be highly responsive to the data as it comes in and to act decisively. One problem with this strategy is that the available data may not be able to point the Fed's policy in the right direction for several information cycles.

Consider the Skeptical Optimist's "Climbing Limo" economic growth forecasting method (for which Political Calculations constructed this tool). Compared to the Bureau of Economic Analysis' one-quarter approach for forecasting economic growth, the climbing limo's two-quarter approach provides better forecasts roughly 60% of the time. Both methods are backward-looking. As a result, both methods fall short on occasion when forecasting future growth, as demonstrated in this chart, which shows both of these backward looking methods "steering" wildly off-track in 2000 and 2002. What's to say that the backward-looking inflation and unemployment data underlying Mankiw's Federal Funds Rate model wouldn't steer monetary policy significantly off track for a sustained period of time?

Another problem is that the markets may be off playing other games instead of focusing upon growing concerns. Diverted, the market can continue just plucking along for a prolonged period of time, effectively keeping it from taking Mankiw's timely "automatic" corrective action when it might help avoid potentially nasty outcomes or corrections.

What the Fed Really Is

Deep down, the Federal Reserve isn't a bank for banks so much as it's a logistics organization – one that's dedicated to supplying money to support the U.S. economy. As such, its primary goal is to supply the right amount of money to the right place at the right time.

Logistics organizations may successfully operate on a just-in-time basis, which is, in essence, what Mankiw proposes, but that success relies on having an efficient supply chain that responds nearly instantaneously to real-time data that is continuously collected and reported to people who can act on the information in real-time.

The Federal Reserve, which relies on information collected by U.S. federal government agencies that issue reports at monthly or quarterly intervals, does not get that kind of continuous feedback. Therefore, the Fed must act as any business does that does not have such a feedback system – it must use forward-looking data and forecasts to set its money supply policy. Seeing it this way, I hope, helps explain why the Fed must use forward looking data and forecasting methods to avoid both shortfalls and surpluses in the money supply it controls as both situations are undesirable.

And that's why you, young driver, and the Fed need to keep your eyes in the direction you're going! Nobody wants either of you getting involved in a smash-up....