Political Calculations
Unexpectedly Intriguing!
November 15, 2006
How to Predict a Recession Using Our Tools

We've previously commented on how the users of our reckoning and visualizing recession probability tools might be able to make best use of them in forecasting if a recession will materialize within the context of another article, but this topic really deserves its own post.

We've identified the 50% probability level as being a key threshold for telling if the economy will move toward recession sometime over the next 12 months, but there's an interesting question that should be asked: if the current probability of recession is hovering around the 50% mark, what has to happen to tip the balance enough to make the call?

To answer this question, we tapped the Federal Reserve's historical records for each of the components that goes into the recession probability calculation. We loaded up our spreadsheet software with the available data, ran the numbers, and found a recurring pattern as the U.S. economy approached the 50% probability mark.

We'll spare you the spreadsheet, but the pattern is essentially this:

That latter point is illustrated by this chart from Jonathan Wright's paper: 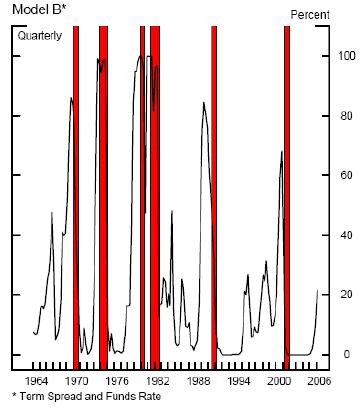 The chart above shows two periods where the odds of recession spiked up near the 50% level, then receded with no following recession, in both 1966 and 1983. Meanwhile, when a recession does follow crossing the key 50% threshold, the probability of recession grows significantly past this point.

As for our first point, the "bounciness" we see in our figures is a direct result of our tool's making use of the daily data for the bond spread and federal funds rate components of the formula. In his original paper, Jonathan Wright uses the average of these figures over a three month period (our thanks to a sharp-eyed reader for pointing this out!) This approach has the advantage of reducing the volatility in the data. This reduced volatility allows the user to discount any unusual spikes that might be seen in using the daily data and be sure that the probability has truly edged up over the 50% mark.

There are two disadvantages to averaging the values of the data components over a 90-91 calendar day period. The first is that in the case that the probability of recession occurring is slowly, yet consistently increasing, it delays the prediction of a recession until the averages finally reach the 50% probability level. The second is more practical – there aren't any online sources of which we're aware that have already averaged the daily values of the last 90-91 days of bond spread and federal funds rate data together for you, which means that you have to do the averaging yourself!

That's why we're opting to leave our tool unchanged and to simply point this fact out for your reference!

So, recession hounds, if you're looking to predict a recession, that's what you need to see and to consider before you can confidently make the call. Tally ho! 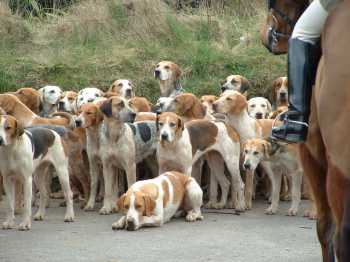