In creating our mathematical model of the highest and lowest historical inflation in the United States yesterday, we discovered the formula we generated for describing the highest recorded inflation significantly undershot the actual recorded data for periods of time ranging from 2 to 7 years, while closely correlating with data from all other periods. Obviously, we needed to take a closer look at the data, so that's what we did!

The chart below focuses in on the area in question that, if only for our lack of imagination, we're calling "The Bump": 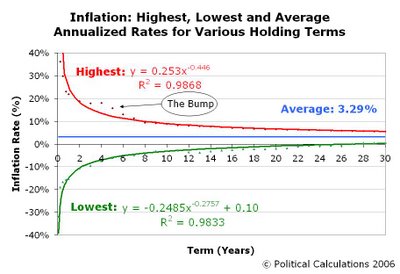 We wanted to see how much data fell outside our modeled "extreme" limit, since this would provide a good indication of how messed up our formula might be. The table below presents our findings, along with the number of affected data points out of the entire series we originally analyzed:

The most discrepancies between modeled and actual data occurs for the 1090 2-year rolling periods we analyzed, with 2.02% of the actual data falling outside our modeled limits. The next worse are the 3-year (1.76%), 4-year (1.41%) and 5-year (1.14%), with the other periods falling below 0.5%. Given the good correlation between all our other modeled periods and the actual data, these results confirm that our formula for estimating the highest inflation for a given period of time will work and may be used successfully for its intended purpose: providing the user with a range of extremes in inflation for making investment decisions.

But what about the actual data? What happened in history that created these much higher than high rates of inflation?

Reviewing the data, we found that these exceptionally high periods of inflation all corresponded with the same event: the sky-high inflation rates that rocked the U.S. economy in the aftermath of World War I. The rolling periods of time that produced the much higher than modeled inflation rates all ended in the period from October 1918 to January 1921.

A quick review of the history of this period found the primary culprits behind the inflation. One significant factor came from U.S.' entry in the Great War in 1917, which significantly drove up the prices of many consumer goods as resources were diverted by government intervention away from normal civilian production.

The other main factor was also the direct result of World War I, but is much less obvious. Here, the reason has to do with how the countries involved in the fighting went about financing their war efforts. 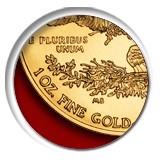 During the course of the war, many of the European nations involved in the fighting went off the gold standard that had prevailed in the pre- and early-war years, largely for the purpose of continuing to finance their war efforts through deficit spending (in effect, inflating their currencies.)

With so many countries going off the gold standard for setting the value of their currencies, both individuals and institutions sought to move their gold holdings away from these countries to other nations that were still maintaining a gold standard. The United States was a primary recipient of these flows of gold.

But, instead of simply holding the gold, the Federal Reserve of the day monetized it instead – in other words, the newly created Fed issued U.S. dollars backed by the gold that was coming in from other parts of the world. In doing so, the Fed sharply increased the money supply in the U.S. and, in effect, ensured that significant inflation would be the result. Robert Mundell describes the cause and effect of how maintaining the gold standard in the U.S. led to hyper-inflation in the U.S.:

World War I made gold unstable. The instability began when deficit spending pushed the European belligerents off the gold standard, and gold came to the United States, where the newly-created Federal Reserve System monetized it, doubling the dollar price level and halving the real value of gold.

The inflation continued until the Fed slammed the brakes on the U.S. economy and plunged the nation into the recession of 1920-1921. The following chart shows the effect of this policy on the rate of inflation as the steepest, deepest slope on the chart (approximately at 1920): 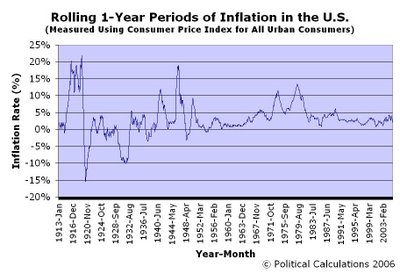 The stuff we learn when we go off on these tangents!...