That's the title of Andrew Klein's very interesting article that we came across back in July. What intrigued us most was the lead paragraphs of Klein's article, which outline the promise of research led by the National Institute of Health's David Smith, the results of which were published in the November 24, 2005 edition ($$$) of Nature:

Scientists have created a mathematical formula that could improve malaria treatment by accurately predicting which populations are most vulnerable to the disease, which kills 1.3 million people, mostly children, annually.

The formula could help to focus anti-malarial drugs and preventative treatments on those who need them most by identifying and targeting high-risk groups. This would eliminate the need for blanket treatment of large populations, a process that wastes scarce resources and runs the risk of increasing resistance to anti-malarial drugs. 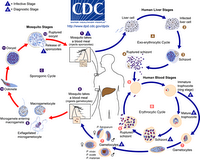 This potential improvement in the treatment of malaria is extremely important, since the NIH's researchers determined that 20% of the children studied contracted 80% of all the malarial infections. By focusing on those most likely to be especially vulnerable to infection though mosquito bites, malaria might be much better controlled today and in the future. 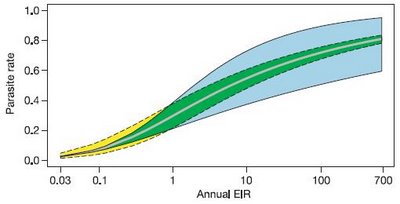 If you're a regular visitor to Political Calculations, you already know where this is going, as our latest tool does the math put forward by the NIH's researchers! Health researchers and epidemiologists need only to enter the Entomological Inoculation Rate to find the corresponding Parasite Ratio for a given population:

The paper published by Smith et al in Nature informs us that the Entomological Inoculation Rate is rarely recorded in Africa, while the Parasite Ratio is a widely measured index of infection risk. Because of these facts, we thought it might also be useful to make a tool to find the Entomological Inoculation Rate given only the Parasite Ratio, which follows below:

As a final note, the formula can be used to find the amount of benefit, as measured by a lower Parasite Ratio (PR), that can be achieved by taking steps to reduce the Entomological Inoculation Rate (EIR) for the affected populations:

Blanket treatment, as is often the practice in regions afflicted by malaria, would make these benefits prohibitively expensive to achieve. By instead focusing malaria control efforts aimed at reducing the EIR by targeting those most susceptible to infection, scarce resources could be better applied and substantially more lives saved – all through the magic of math!

Update: Reuters reports that malaria may be facilitating the spread of AIDS in sub-Saharan Africa. If the researchers' findings hold up, this report suggests that Emily Oster's proposal for reducing the spread of AIDS in Africa by focusing on other sexually-transmitted diseases might have a more "mainstream" disease to include in the list of conditions to target (one with the benefit of carrying less potential stigma for those who might not seek treatment otherwise).