With the BEA's finalization of the 2006 third quarter GDP figures last Thursday (available here as a 136KB PDF document), we thought it would be a good time to pull out our backward-looking crystal ball to forecast the future direction of the U.S. economy.

We, and you, can accomplish this task by taking advantage of our "Climbing Limo" GDP forecasting tool, which was inspired by The Skeptical Optimist. The method allows you to predict the level of GDP some three quarters into the future. All you need is the most recent history of GDP data, and maybe a wizard hat, and you're now just as qualified as any professionally-trained pundit to predict where the U.S. economy is going, and maybe even more so!

The following chart shows what we found after incorporating the latest data and, for good measure, shows the actual and forecast values of inflation-adjusted GDP going back to the second quarter of 2005, some two years before the latest quarter for which we've forecast data. The heavy green line represents the recorded inflation-adjusted (or real) GDP results, while the dashed purple line shows the level forecast by the "Climbing Limo" method: 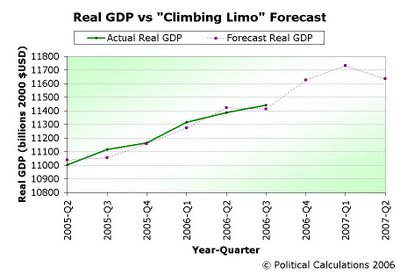 See? Anybody can do this! Maybe we should try our hands at astrology!