Today's non-action by the Federal Reserve in leaving the Federal Funds Rate unchanged at 5.25% was pretty much what Fed watchers have been expecting. What they may not have been expecting, especially compared to recent weeks, is that the probability of recession beginning sometime in 2007 has essentially leveled off at 46.4%, based upon today's closing 10-year Treasury yield of 4.48% and a 3-month Treasury yield of 4.79%.

What's happened to produce this effect? Well, if we were to point to one single event, it would be Paul Krugman's December 1 column (HT: Mark Thoma, who's excerpted much of what's hidden behind the New York Times' TimesSelect) that a recession in 2007 would be likely! Given Krugman's dismal record as an economic forecaster (HT: Will Franklin), we believe this single column all but ensured that the U.S. economy in 2007 would be recession free! (In case anyone wondered why we were so excited that Professor Krugman visited us back on December 1, we hope this explains why!)

More seriously, what has happened is the that the yield of the 3-month Treasury began a significant decline at the end of November. The trend is easily seen in the Constant Maturity Treasury yield curve data (Note: we point to the secondary market yield data on our tool since it so far seems to fairly represent the one-quarter average of constant maturity treasury yield data that the recession probability method developed by Jonathan Wright uses. So far, we haven't found the averaged data posted conveniently anywhere online.) Here, the 3-month Treasury dropped from a high closing daily value of 5.27% on November 27, to a value of 5.22% on December 1 when Krugman's column appeared, then on down to 4.87% today, all while the 10-year Treasury yield has remained essentially flat around 4.50%.

This action has flattened out the yield curve after having become increasingly inverted in recent weeks, perhaps driven by an assessment by bond traders that a 2007 recession would be unlikely. Perhaps again driven by their assessment of Paul Krugman's skill as an economic prognosticator. (Have we given the good professor enough trouble yet?)

In any case, our visualization of the probability of recession occurring in the next 12 months shows the snapshot of where we are today: 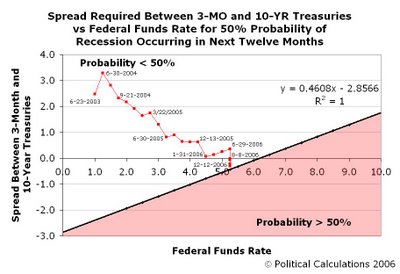 The next meeting of the Fed's Open Market Committee is set for January 30-31. Since the current expectations would suggest that they'll be cutting interest rates, we're looking forward to the potential for real action the next time around!