While we often make fun of economic prognosticators, we thought we'd take the opportunity to deflate our preferred method of forecasting future levels of GDP. Consider today's news that economic growth in the U.S. in the fourth quarter of 2006 (2006-Q4) grew at an annual rate of 3.5% to a level of 11,541.6 billion dollars after adjusting for inflation.

So, how did the forecast get so far off from where we've now seen the advance GDP data come in? Simply put, two big things have changed between the U.S. economy of 2006-Q4 and the U.S. economy that existed between 2005-Q3 and 2006-Q1: the housing market has decelerated and motor vehicle production in the U.S. has become a drag upon the economy.

In a nutshell, that's pretty much it. The Reuters article underscores this point with respect to domestic automobile production, noting that:

... motor vehicle output restrained GDP sharply. Excluding motor vehicle production, GDP would have been up at a 4.8 percent rate during the quarter.

Now, all this is just advance data and at this point, we would anticipate that the final numbers that will be released on March 29, 2007 will be revised upward, but not to the levels the Climbing Limo method had forecast. 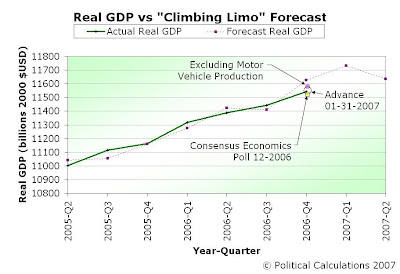 In reality, all this highlights the key weakness of any forecasting method that only looks at past data. Not only was the Climbing Limo off by a substantial margin, the collective wisdom of economic forecasters was overly pessimistic, even though they presumably were using far more up-to-date data in their own predictions. As they say in the investing industry, "past performance is no guarantee of future results."