What do a seemingly unending stream of car burnings and the French Social Security program have in common?

The answer may be that the more Renaults, Peugeots and Citroëns that go up in flames, the better the finances for France's social safety net becomes.

Let's start by looking at France's troubled Social Security program. The program has had an ongoing problem with being able to cover the escalating costs of its promised obligations, primarily driven by large deficits in the program's sickness insurance fund, and which has been the focus of recent legislation:

France's Social Security program operates primarily on a "pay-as-you-go" system, very similar to the U.S. Social Security program operated for much of its history and how the program will operate again once its Old Age Survivor and Disability Insurance Trust Fund is depleted in 2041. Like the United States, France has sought to establish its own pension reserve fund, as described recently in a December 2006 GAO report (emphasis added):

Other countries that have recently created pension reserve funds for their pension programs have a shorter period in which to accumulate reserves before population aging starts straining public finances. In particular, the imminent retirement of the baby boom generation is likely to make it challenging to continue channeling a substantial amount of resources to these funds. France, for example, relies primarily on social security surpluses to finance its pension reserve fund set up in 1999. Given its demographic trends, however, it may be unable to do this beyond the next few years.

So, we see that demographically speaking, the backs of the French politicans and bureaucrats responsible for administering the program are already very nearly up against the wall. As we've seen, portions of the program are already strained as the funding needed to sustain the promises of French politicians is not sufficient to cover the benefits the French people expect. And of course, no politician in France survives for long by seriously considering cutting back on the generosity of the welfare state's benefits.

Meanwhile, the ability of French politicians and bureaucrats to raise taxes to cover the expected shortfalls in the program is highly limited. France's taxes are already high enough to drive its highest tax-paying citizens away to nations with lower taxes - most notably and recently, French recording star Johnny Hallyday. As an added constraint, most serious candidates for public office in France promise to lower the nation's high tax rates.

So, the question for French leaders and bureaucrats becomes "How can you raise tax revenues without raising taxes?"

Two answers come immediately to mind. France might do so by increasing its rate of economic growth (in which a strong and growing economy provides ever-greater tax revenues) or alternatively through inflation (in which a country fires up its printing presses to pay its bills with money that becomes worth less and less.)

Unfortunately, France really isn't in a good position to pursue either policy. The country's immediate prospects for economic growth are not good, meaning that French politicians have few options to grow their way out of trouble.

They are likewise constrained from unleashing the forces of inflation. Here, France's membership in the European Union and its adoption of the Euro currency means that France's monetary policy is set by European bureaucrats in Brussels rather than in Paris. This makes inflating the country's currency something out of the reach of France's political bureaucracy.

How to Raise Tax Revenues without Raising Taxes?

Alternatively, the question might be: how can a nation increase inflation without creating inflation?

The answer to both questions lies in how France pays for its social security system (emphasis added):

Insured persons contribute 6.8% of total earnings and employers 12.80% of total payroll. The Government: contributes with proceeds from a 12% surcharge on automobile insurance premiums plus proceeds from an earmarked tax on the costs of pharmaceutical advertising, alcohol, and tobacco; government also provides funds for new hospital construction and part of the cost for certain health and social services.

France mandates that all automobiles in the nation must be insured by their owners. In 2003, there were an estimated 29.3 million cars (personal and commercial) in France - roughly 491 passenger cars per 1000 people. These numbers suggest that quite a bit of revenue may be raised to directly support France's strained Social Security program through the tax on motor insurance contracts.

Enter the country's prolonged series of riots in which cars are routinely torched in many urban areas of France. As Roger L. Simon observed about automobile insurance in France in November 2005: "Can you imagine what the cost of that is going to be?"

The Cost of That

We don't know. We tried to find data to compare the amount of tax collected by the French government from the tax on automobile insurance and couldn't find more current data than for 2002 when the tax brought €0.95 billion directly into the French Social Security program. This would be our benchmark for comparisons in our later years of interest. 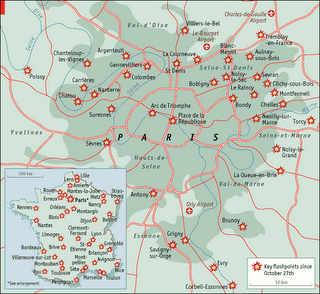 What we suspect is that auto insurance rates in France have risen substantially as a result of the ongoing series of car burning activity. We also suspect that given their constraints in public policy, French politicians and bureaucrats are actually positively incented to allow the car burnings to continue indefinitely as doing so provides increased tax revenue without increased taxes or alternatively, higher inflation (as measured by car insurance premiums) without creating inflation. We should also note here that the car burnings are largely confined to the outskirts of France's major cities and have not affected France's resources for economic production to any great extent.

So instead of taking concrete steps to end the violence and vandalism, we believe we're seeing the French government attempt to "control" the rate of the burn. Too many car burnings and they will have to act decisively to end the riots to continue in power. Too few car burnings and they can't count on collecting their welfare state's much demanded additional tax revenue. For a French politician, it's like walking a tightrope between certain doom and absolute disaster.

We hope we're wrong and that the tax revenue data we have been unable to find shows that what we suspect may be true is not. Because if our suspicions do hold true, it would indicate to us that France has truly crossed its own demographic "event horizon" and is well on the way down its "death spiral" from which it will not emerge as we have known it.