Although they might perhaps now regret it, the city of Seattle, perhaps unintentionally, conducted a bold experiment in multi-voting (providing voters multiple options for expressing their true preferences) in an election held on Tuesday, March 13.

Among other local ballot issues, voters were presented with two separate options regarding the potential replacement of the Alaskan Way Viaduct, a major thoroughfare running along the city's waterfront in downtown Seattle. The two choices for the advisory ballot: an underground tunnel (preferred by many elected officials in the city government and the big developers who fund their campaigns) and an elevated roadway structure (similar to the existing Viaduct).

In presenting these two separate ballot issues directly related to the same issue, the city of Seattle in essence conducted a 22 Designed Experiment. The following diagram illustrates how individual voters could have marked their ballots: 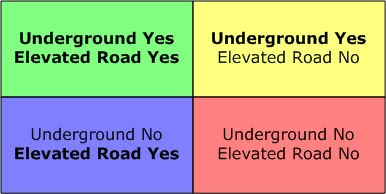 Aside from the pure YES or NO votes for each measure, we see that the ballots also allow us to truly determine voter intent on the issue of whether or not voters want the Alaskan Way Viaduct to be replaced at all. Here's how that works - the total votes cast in FAVOR of either measure may be combined together as one "super" vote in support of replacing the Viaduct. Meanwhile, all the votes cast against each measures would count as a vote against replacing the Viaduct.

By taking this approach, public officials in Seattle may be able to accurately determine which of these two options are preferred by the city's voters, even if both measures passed or failed. Here's an example of how that might work, first showing some hypothetical 200,000 voters might cast their ballots, with both measures failing (the actual tally is still underway at this writing): Now, let's look at the combination of groupings where voters were in favor of at least one Viaduct replacement option:

What Seattle city officials must do now is examine the official vote totals for the recent election to determine if voters do in fact favor replacing the Viaduct or if they want to pursue an option where the current structure would be maintained. If the majority of cast ballots come out in favor of replacing the structure, they will need to propose new options for the voters to consider should they present this choice to the voters in a future election. Or depending upon the relative vote totals, they might place just the more popular of the previous options on a new ballot, on the theory that the presence of the less popular option on the ballot prevented the more popular option from gaining clear majority support.

Stefan Sharkansky of Sound Politics has been tracking the vote tallies - be sure to read down into the comments for the latest vote totals.