After comparing the remarkable rate of growth of U.S. exports to China in the Bush administration from the low level that defined President Clinton's second term, we felt that this acceleration was remarkable enough to attempt to pinpoint just when that export growth began to surge. 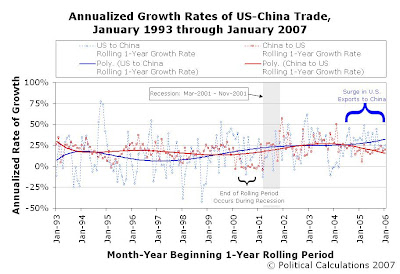 The trendlines largely tell the story: From February 1994 through February 1999, the rate of growth of China's exports to the U.S. (the solid red curve) strongly outperformed the rate of growth the the U.S.' exports to China (the solid blue curve.) This situation reversed from April 1999 through September 2002, although this may have more to do with the lack of growth in China's exports to the U.S. from May 2000 to January 2001, when the growth rate of exports from China to the U.S. essentially "flatlined" around 0%.

The rolling period chart also highlights the major disadvantage the U.S. had in trade with China during the majority of the Clinton administration: extreme volatility. This is consistent with the export from the U.S. of high-dollar, but low-volume goods, such as commercial aircraft. By comparison, exports under the Bush administration have benefitted from reduced volatility, suggesting that what the U.S. is now exporting to China is now more characterized by larger quantities of lower valued goods.

From our perspective, that seems to be a better business model for the United States.