Political Calculations
Unexpectedly Intriguing!
May 1, 2007
The Distribution of Income by Age in the U.S.

We're always experimenting with different ways of presenting data here at Political Calculations. Today, we're going to continue that experimentation by showing the distribution of income earning individuals in the U.S by their age and their annual income for 2005.

The data behind the chart below was taken from the U.S. Census Current Population Survey for 2005: 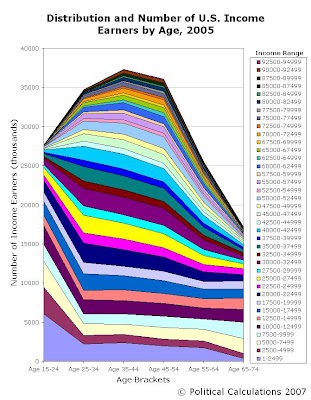 General Trends in the Chart

As you might expect, the young (Age 15-24) make up the greatest numbers of low income earners, as this group dominates the lowest end of the income strata. Much of this discrepancy disappears for the Age 25-34 grouping, who are largely finished with their schooling and are now able to work full time.