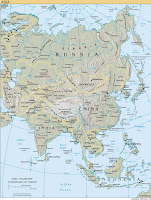 Last week, we launched our latest series comparing the relative economic outputs of the nations of the world with Africa, so this week, we're turning our focus to Earth's largest, most populous and richest continent, Asia!

Once again, we've provided a dynamic ranking table to show each of the continent's countries' Gross Domestic Product (GDP) adjusted for Purchasing Power Parity (PPP), their population and GDP-PPP per Capita for 2006. As we did last week, we'll also determine each country's annualized rate of growth of their GDP-PPP per capita since 2004.

Perhaps the major change in this edition of our Asia edition is that we have not included the West Bank or Gaza since we don't have any reliable population or GDP data for either for 2006. We'll also note that we're missing 2006 GDP data for Afghanistan, Bhutan, East Timor, Macau and the Maldives, which we believe may account their low or negative annualized GDP-PPP per capita growth rates since 2004. If we find updated information for any of these countries, we'll update the table accordingly.

We'll have some additional comments after the table. As a teaser, think about this: What do the United Arab Emirates and Azerbaijan have in common?...

Azerbaijan and the United Arab Emirates

The answer to our riddle above has two parts: oil and globalization! Both nations have seen their GDP-PPP per capita grow at an annual rates of more than 40%, the highest for the entire Asian continent, largely due to the large amount of revenue realized through the increased production and price for crude oil and their connections with international markets.

But, newly developed oil production capability doesn't explain the United Arab Emirates' growth. When similar growth is not observed for other established oil-rich nations such as Bahrain, Brunei, Iran, Kuwait, Russia, Saudi Arabia and excluding Iraq, which is still rebounding following the lifting of economic sanctions, despite rising crude oil prices, something else must be at work.

That something else is the UAE's economic diversification compared to its oil-producing brethren in the global economy. The nation is emerging as one of the world's major financial centers, which has allowed it to significantly outpace the growth of these other nations as its economy features strong liquidity and inexpensive credit to drive internal investments.