Once again, we here at Political Calculations dare to plunge into the treacherous waters of economic forecasting, now that the final revision for US GDP in the third quarter of 2007 has now been released by the BEA!

First up, let's take a look at our GDP bullet charts for the most recent reporting period, which shows the annualized change in inflation-adjusted GDP over a one-quarter and two-quarter period against the backdrop of the next two most recent quarters and overall historical GDP performance since 1980 (shown as the temperature scale background!): As we've noted before, these figures are far higher than we had originally anticipated and, if we could put our finger on one thing that might be behind it, we would point to the data's Price Deflator, which clocked in at the especially low level of 1.0% for the third quarter of 2007. This figure has shown quite a bit of volatility in the past year, ranging from a high of 4.2% just two quarters earlier in 2007-Q1 to 1.0% as of 2007-Q3. The table below shows the level of the price deflator for each quarter from 2004-Q1 onward:

It's interesting to note that when the Real GDP annualized one-quarter growth rate clocked in at 0.6% back in 2007-Q1, the corresponding GDP Price Deflator was 4.2%, the highest we've seen over these years. Likewise, the exceptionally high GDP figure for 2007-Q3 coincides with the lowest level noted by the BEA for this period. In the meantime, Our best guess is that at some point in the future, the price deflator data for 2007 will be straightened out in another revision as other economic data fills in the larger economic picture.

Regardless, the GDP numbers are the only numbers we have now, so we're going to run with them! Our following chart shows where we might expect GDP to be for the fourth quarter of 2007 using the Climbing Limo method and the Modified Limo method for forecasting GDP levels: 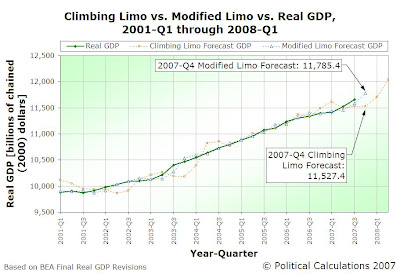 Given the huge swings that we've observed in the GDP Price Deflator, we would anticipate the Real GDP figure will come in between the forecast values produced by the Climbing Limo and the Modified Limo forecasting methods. It may even very well be in negative territory when considering a one-quarter annualized growth rate (the two-quarter annualized growth rate should still be positive.)

But Can We Trust the BEA's GDP Price Deflator?

Tom Blumer has observed that the last time that we saw the Real GDP growth rates at the levels that they've registered in this year was in the run-up to the 2000 elections. Like the upcoming 2008 election, the year 2000 was the last time in which an incumbent was not running for re-election as President.

Now, let's have some fun and explore a political conspiracy theory! Let's say that foul things are afoot and that the data jocks at the BEA favor one political party in particular for the Presidency. Let's call that party "The Democrats."

In 2000, "The Democrats" were the incumbent party of the Presidency. Let's say that the BEA data jocks, favoring this party, wanted to use their influence over the numbers to try to skew the picture of the U.S. economy to favor their preferred party's presidential replacement candidate. If you were the leader of these crooked bean counters, how would you skew the GDP numbers to favor that candidate?

If you answer "way up," you might be on to something! The year 2000 saw some of the highest reported GDP growth rates of recent times that weren't a result of the economy rebounding after a large-scale natural disaster.

More importantly, these original figures were revised sharply downward years later to reflect what was actually an economy sliding strongly toward recession.

The Illusion of Recession

Now, let's flash forward to 2008. Let's say that the BEA is still under the sway of many of the same bean counters as in 2000, but now, the incumbent party of the presidency is not "The Democrats." We'll ask the question again: as the leader of the Evil Data Jocks, how might you skew the GDP data under your control to favor the candidate of your preferred party?

Update (22 December 2007): Greg Mankiw posts a chart that would seem to confirm this correlation!

So, if you can create the illusion that the economy is not doing all right, that would shift things in favor of your preferred party. The question then becomes "how can you create that illusion?"

For that, you might first want to jack up the apparent rate of GDP growth in the economy in the year before the election, then create an "artificial recession" by skewing the underlying data to produce apparently negative growth rates. From what we've seen in the influence it has over the Real GDP figure, manipulating the level of the GDP Price Deflator might be an ideal way to achieve this effect.

Is There Really a Conspiracy?

We don't know, and we doubt it, but it sure is fun to consider! In the meantime, we'll have wait to see what the evil data jocks at the BEA are cooking up with the next GDP data release!

All data jocks are evil. You didn't know?