Since we were the first to break the news that the S&P 500's earnings were going to be slashed downward for the third quarter of 2007 and the year overall, there's been a lot of noise from the usual market bears suggesting that a full-up recession might be on the way.

So we thought we'd build on our post yesterday, in which we considered all the different types of company earnings (reported, operating, core and dividends) and use Standard & Poor's own historic and forecast data, at least as of 29 November 2007, to assess what lies ahead for the U.S. economy through the end of 2007 and into 2008. The following chart shows all this data going back to the end of 1996, which marks the earliest period for which S&P maintains its core earnings data (S&P provides operating earnings only back to the first quarter of 1988): 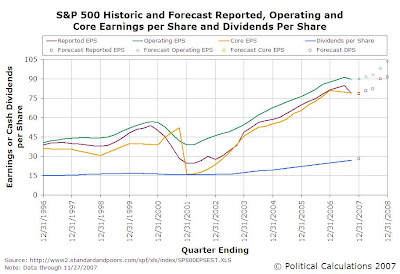 The chart shows that while trailing-year corporate earnings are expected to slow through the end of this year, S&P also expects that they'll recover strongly in 2008 with the S&P 500's Operating EPS growing to $103.47 and Reported EPS growing to $91.31.

The chart also illustrates that a decline in the S&P 500's earnings does not necessarily translate into an imminent recession. Looking back at 1997, we find that while the various corporate earning measures dropped throughout the year, no corresponding recession in the general economy occurred.

Meanwhile, the only drop in earnings that directly precedes a recession began in September 2000. Interestingly, S&P's core earnings rose sharply, peaking in September 2001 before crashing to its lowest level on record by the end of the year. The NBER dates the recession that occurred in this timeframe from March to November 2001.

Based on this data, we find that drops in U.S. corporate earnings do not necessarily precede a U.S. economic recession.