Making the rounds this morning in the econoblogosphere, Bruce Bartlett dissects presidential candidate Mike Huckabee's preferred method of taxing everybody in the U.S. in Why the Fair Tax Won't Work (HT: Greg Mankiw, Mike Moffatt). The key points, as we see them: 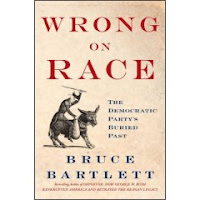 While tax policy is definitely Bruce's forté, we would be remiss if we didn't acknowledge that he has a new book coming out on January 8: Wrong on Race: The Democratic Party’s Buried Past - Bruce's blog post expanding upon his December 24, 2007 Wall Street Journal op-ed offers a preview of his venture into the history of the U.S. Democratic Party's views on race from the earliest days of the nation through the run-up to 2008's presidential election.