Before we get into the details of the latest update to our signature tool The S&P 500 at Your Fingertips incorporating the latest market data through December 2007, we'll begin by saying that as of January 2008, the stock market has entered what we would call a significant disruptive event. In fact, if any of you remember that prediction we made of where the market would be in December 2008 early on January 2nd, well, that's out the window as the order that had existed in the market since July 2003 has broken down.

The following chart shows the evidence of the breaking down of the established order: 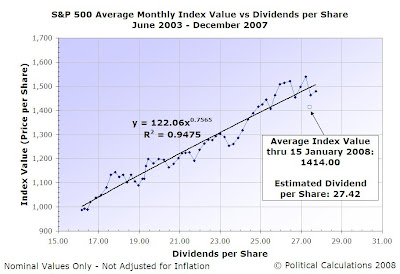 Now that we have your attention, the driving factor behind the breakdown of the previous state of order in the market is not the relatively rapid decline of stock prices since the beginning of the year (for context, here are the worst five month-to-month periods for the S&P 500 since 1871 - January 2008 isn't in this league!), but rather the breakdown of the year-over-year growth rate of dividends. With a number of big financial and mortgage companies acting to cut their dividends (Citibank, MBIA, National City, Ambac), the future for dividends through 2008 is bleak.

Update 18 February 2008: The analysis below is flawed. While the analysis would be valid if we were using the correct total estimate for dividends per share for the first quarter of 2008, we erred in not incorporating the value of dividends already paid in the first quarter into our calculations, as these are not included in the dividend futures data that we did use. The values presented in the charts below aren't too far off from where they should be, but they're still off, which we're getting sorted out now. Also, the future for dividends through 2008 isn't as bad as described in the paragraph above, but we've learned a lot since we first posted this analysis! More details....

The following chart illustrates what we mean. Here, we've taken the dividend futures data through September 2009 (as of 15 January 2008) available at IndexArb (amazing data site, by the way!) and projected the year-over-year growth rate for dividends to then: 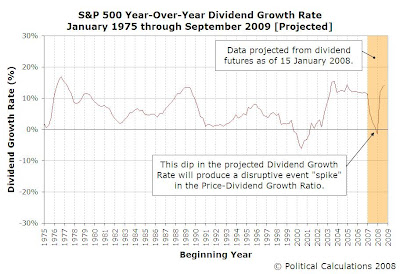 For clarity, the first point of the chart covers the period from January 1975 to January 1976 and the last point in the chart above covers the period from September 2008 to September 2009. We should also note that futures data is less reliable as you go further out into the future, as it becomes much more likely that actual dividends will come in at a different level from what the futures market is forecasting today. This is less of an issue in the short term.

Mathematically, the dip in the dividend growth rate to near-zero low levels is what creates the "spike" effect in the charts showing the Price-Dividend Growth Ratio over time and is consistent with an increased level of distress in the stock market. That's important because these spikes often coincide with recessions in the general economy. The following chart shows the level of the Price-Dividend Growth Ratio through December 2007, and projects into January 2008 based on the available data through 15 January 2008: 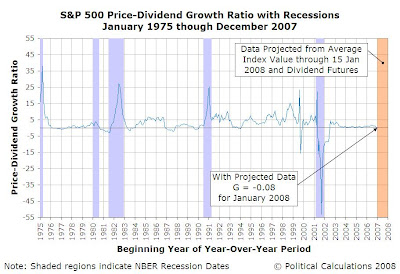 The chart above shows that the level of distress in the stock market through December 2007 was low, which confirms that 2007 was recession free (sorry, Paul!) Assuming that the values we've projected for January 2008 hold through the rest of the month, the Price-Dividend Growth Ratio has moved into negative territory, which often leads periods of increased distress in the market.

What's not yet clear is whether the impending increased level of distress will coincide with a recession in the general economy. As you can see in the chart above, not every significant spike in the Price-Dividend Growth Ratio does so. For the odds of recession, we turn to our Recession Probability Track (in the right hand margin, or alternately, at this link) which shows the likelihood of a recession occurring within a one year period following the date of interest. Here, we'll note that the probability of recession peaked at 50% back on 4 April 2007, less than one-year ago. Since we're still in the one-year prediction period for that date, that's the odds that the U.S. will dip into a recession in 2008.

And now, for our monthly update of the S&P 500 at Your Fingertips! Here's the rates of return we find in the S&P 500 for investments covering the periods since January 1871, since December 2006 and since January 2007:

We'll be including the track of the Price-Dividend Growth Ratio in our future monthly updates for the S&P 500 at Your Fingertips tool.