Political Calculations
Unexpectedly Intriguing!
February 26, 2008
The Priorities of the House

We've weighed in several times now on the lack of quality leadership that characterizes the current U.S. Congress, so we thought we'd take this opportunity to consider an instance where the law-making body appears to have gotten their act together.

Back on Tuesday, 12 February 2008, we thought we'd have a good example for when partisan interests would be set aside for the pursuit of the national interest. The Senate passed an update to the thirty-year old Foreign Intelligence Surveillance Act (FISA), which would extend what had been temporary provisions enacted in the aftermath of the September 11th terrorist attack of 2001, by a wide bipartison majority.

With the temporary provisions set to expire on Saturday, 16 February 2008, this act allowed sufficient time for the U.S. House to hold a vote on the Senate bill, without compromising the efforts of U.S. intelligence agencies to monitor the international communications of foreigners related to committing additional acts of terrorism in the United States.

A key part of the Senate's bill protects U.S. telecommunication companies from liability for agreeing to cooperate with U.S. intelligence agencies seeking to gather information to prevent further attacks on U.S. soil. Without the provision, the companies cannot afford the risk of cooperating with U.S. intelligence agencies. On Saturday, 23 February 2008, the White House confirmed that the telecommunication companies assisting intelligence investigations were continuing to voluntarily cooperate with their efforts, cooperating with the government in anticipation that they will ultimately be protected from lawsuits.

But since the Senate passed the FISA update, the leaders of the House of Representatives have chosen to not act on the matter. At all. That lack of action increases the risks to telecommunication companies, which in turn increases the risk to the safety of the people of the United States should these businesses instead choose to reduce their risk of legal and financial exposure to potentially crippling litigation.

So why are we writing about this matter? FISA legislation is pretty far afield from the kinds of things we normally cover.

Because yesterday, the priorities of the leadership of the House of Representatives was driven home to us by a visit from the halls of Congress. Just in case anybody might be wondering what the U.S. House of Representatives might find to be more important than, say, passing a critical to national security update to the Foreign Intelligence Surveillance Act as of Monday, 25 February 2008, we offer this bit of evidence from our traffic logs: 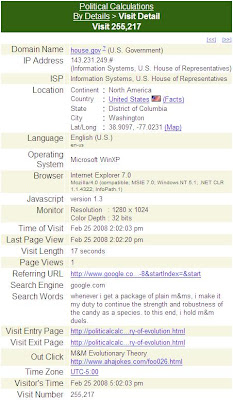 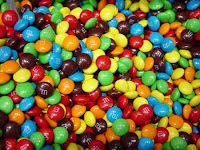 While we appreciate the visit, as well as the need for humor in contentious times, this is to us just another indicator of the failure of the Congress' leadership, one that demonstrates a lack of serious commitment to attending to things that need to get done in a timely manner. We are especially taken by the rather unique Google search that brought them to us.

Trust us, the M&M Theory of Evolution will still be here after you've attended to the nation's business. We'll be waiting....