Last week, we noticed an unusual spike in our daily site traffic in mid-week, which corresponded to having been linked first by TheStreet.com and later by The Consumerist. Being who we are, we immediately pitted the two sites against each other in a contest to see who could drive more visitors our way!

At the time, we declared The Consumerist to be the winner of that contest for one big reason: TheStreet.com had linked to two separate posts at Political Calculations, while The Consumerist had only linked to one, even as the number of unique visitors was nearly identical on both days.

Then it got interesting. Just two days later, TheStreet.com turned around and linked once to the same post that The Consumerist had, which means that we can now directly compare the ability of both sites to direct traffic our way and provide the kind of independent assessment of commercial web sites that online advertisers crave!

First, let's look at some of our site traffic statistics. The following chart goes back to Sunday, 10 February 2008 and shows our daily unique site visits through Monday, 10 March 2008 against our average daily site visits for the past month preceding Tuesday, 4 March 2008, along with upper and lower control limits, between which some 98% of our number of daily site visits would be expected to fall in normal circumstances: 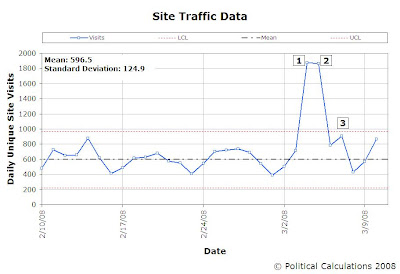 You can see that the data coinciding with Boxes #1 and #2 are well outside what can be expected to be a normal, if high, level of traffic at Political Calculations in the month preceding when these posts were linked. Box #3 would, at first glance, seem to fall within our typical levels of traffic over the preceding month.

But does it? The chart also reveals that our site traffic has a cyclic pattern. Basically, our traffic builds from Sundays through Wednesdays, falls off on both Thursdays and more so on Fridays, before hitting the bottom of the trough on Saturdays. This corresponds with our level of posting activity - we generally only post on Mondays through Fridays, with no posts at all on Saturdays and Sundays.

So the question is how much above our usual traffic on each of the days which these larger sites linked to us? To find out, we calculated the average number of posts we could expect for each day of the week in the month preceding when these spikes in unique visitors occurred. We then calculated the difference between the number of unique site visits we had against the averages we found for each day of the week. The following chart shows our results: 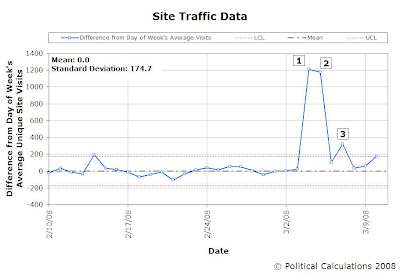 The chart above confirms that each day that either TheStreet.com or The Consumerist linked to us was a banner day. The number of posts we saw from each source of site visitors was well above our typical level of traffic that might be considered normal in the preceding month.

Now, before we get too excited, let's consider some factors that may have influenced these results:

We could go on, but you get the general idea. And for what it's worth, we're just happy to have the additional traffic. More, please!

Update: Added the text ", even as the number of unique visitors was nearly identical on both days" to the end of the second paragraph to clarify why we had previously declared The Consumerist to be the victor!