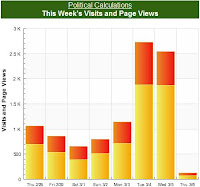 Following up yesterday's post, we thought it might be fun to find out which site drove more traffic to Political Calculations: TheStreet.com or The Consumerist.

And the winner is: The Consumerist!

Now, "wait a minute!" you're likely screaming at your computer screen, "how is that possible?" Political Calculations site traffic was higher in unique visitors and much higher in page views on Tuesday, 4 March 2008 when TheStreet.com linked to you compared to Wednesday, 5 March 2008 when The Consumerist did!

If you look closely, the actual difference between number of site visitors on both days is very small. Tuesday, 4 March saw 1,880 unique visitors, while 5 March had 1,868 unique visitors, just 12 less, which is well within the usual noise level we see from day to day.

With two links pointed to us from TheStreet.com, that created a situation in which some people coming to us from there either:

We'll note that Option C, visited both, likely accounts for the difference in unique page views per day between Tuesday and Wednesday.

The Consumerist, on the other hand, was able to drive a near equivalent number of unique visitors with just one link to our January 2007 post listing the lowest hourly paying jobs in the U.S.. Even more remarkably, that was after they incorporated our list of the ten worst paying hourly jobs into their own post on the topic!

And that's why we're declaring The Consumerist to be the winner of our unexpected traffic-driving contest!

Next up, we'd like to pit Marginal Revolution against Barry Ritholtz' The Big Picture! The rules are simple: MR links to one or more of Political Calculations' posts (their choice) on Tuesday, next week, while BR does the same on Wednesday. On Thursday, we'll reveal who reigns supreme in their ability to drive huge spikes in blog site traffic in the econoblogosphere. Let's see what you've got!