Since the program was established as a pay-as-you-go system, with every dollar paid in via Social Security's payroll tax being paid out in the form of benefits to its recipients, securing a stable source of funding was essential to guaranteeing that those receiving benefits would receive the full amount of what they had been promised by the U.S. government.

The only way the program's originators could accomplish this task, as we discussed yesterday in asking why Social Security has a cap, was to set the maximum income that could be taxed to support the program well below the level at which volatility in the economy would drastically affect the amount of taxes on individual incomes collected in any given year.

In this post, we'll show you why that technique works, as well as why it may not be such a great idea to eliminate the cap on the amount of income upon which Social Security taxes may be imposed.

Top Income Earners Have the Most Volatile Income Over Time

Since we lack the breakdown of taxable income from the early days of the Social Security program, we'll instead look at the IRS data available for the years from 1986 through 2005.

We'll visualize this spreadsheet data to first show how the level of Adjusted Gross Income (AGI) for households, adjusted for inflation (in constant 1982-84 U.S. dollars), has changed for households in the Top 50%, the Top 25%, the Top 10%, the Top 5% and the Top 1% over this period: 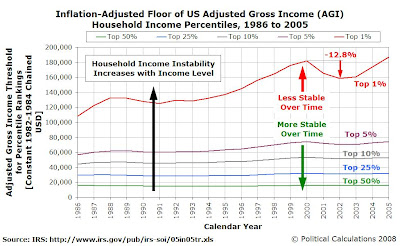 Right off, we see that the inflation-adjusted incomes of U.S. households is the most volatile for those at the top of the income-earning spectrum, while it is the most stable for those at the low end. For instance, if we look at the years coinciding with the peak of the Dot-Com stock market bubble in 2000 through its burst and the following recession in 2002, we see that the incomes of the Top 1% of all income-earning households plummeted some 12.8% from its peak in 2000. We also see that the incomes of the U.S.' top income earners stayed depressed through 2003 and 2004, before recovering to the levels of 2000 in 2005.

Meanwhile, we see that the drop-offs for these years at lower levels of income are much less drastic. Running the numbers, we find that between 2000 to 2002, the adjusted gross incomes at the level defining the threshold of those in the Top 5% declined 5.6%, while the income threshold for the Top 10% fell some 3.7%, the Top 25% threshold dropped 2.2% and the Top 50% dipped just 0.9%.

Clearly, the volatility in income generated from year to year is most volatile for those at the top. Simultaneously, we confirm that the incomes of those at the low end are the most stable over time.

Volatility Levels Across All Incomes

Our next chart stacks these adjusted gross incomes on top of one another, which allows us to see what the overall impact of this top-end volatility would be to the Social Security program: 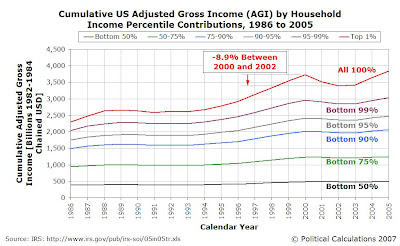 Taken together, we see that the total level of adjusted gross income plunged by some 8.9% between 2000 and 2002, marking the largest, sharpest drop in the years for which we have data.

What Would This Mean for Social Security?

If there were no cap upon the amount of income that could be taxed to support Social Security today, the amount of taxes on income collected to support the program would have dropped by this 8.9% figure between 2000 and 2002. That, in turn, would affect the program's long term ability to pay benefits in the future.

Right now, as a result of reforms undertaken in the 1980s to prepare for the large scale retirement of the Baby Boom generation, Social Security takes in far more money than it pays out in the form of benefits. The excess funds taken in through the Social Security program's payroll income taxes is directed to its trust fund.

However, in less than ten years, as the Baby Boomers retire in large numbers, Social Security's trust fund will begin running annual deficits, as the amount Social Security must pay out in benefits will exceed the amount it takes in through payroll income taxes.

Worse, once Social Security's trust fund is depleted and it reverts fully back to a "pay-as-you-go" program in 2041 (as currently projected by the program's professional actuaries), that kind of drop in funding for the program would fully translate into a major cut in the benefits paid out to all Social Security recipients.

Note: That kind of cut in benefits paid out would be on top of the 26% reduction in benefits that will occur when the Social Security trust fund is fully depleted, even if no recession or other economic event occurs between now and then that would drastically reduces the payroll tax collections that support the program!

Projecting ahead, we figure that anyone born after 1960 could very reasonably expect to be affected by such recession-period benefit cuts, on top of the large cuts in benefits stemming from the depletion of Social Security's trust fund by the baby boomers, as a direct consequence of the greater level of volatility in payroll tax collections that would result from eliminating Social Security's income cap.

And if the maximum amount of income subject to Social Security taxes were reduced to be back in line with the level of income setting the threshold for the Top 25% of household incomes, just a bit ahead of where this level was set back in 1986, the size of the cut in Social Security benefits in a similar period of recession would be just 1.8%.

We therefore find that the cap on the amount of income that can be taxed to support Social Security protects the ability of the program to provide benefits at the level it promises, especially in recessionary periods.

Now, let's make this personal. If you plan to rely on Social Security benefits to support your household in whole or in part in your retirement years, how big of a cut in your benefits could you afford to take if the U.S. economy turned sour for several years?

Why increase your risk in retirement?

Update 23 April 2008: We made minor corrections the chart showing the household adjusted gross income floors from 1986 through 2005. No, the income floors shown shouldn't have been in "billions" of 1982-84 chained U.S. dollars!