We only hinted at it previously, as we were focused more on the health of the U.S. economy, but as Jim Hamilton notes this morning, and Calculated Risk noted several days ago, China's economy is indeed slowing down.

What's more, as measured by international trade between the U.S. and China, China's economy has been decelerating since peaking in January 2006. Here's the evidence, shown as the blue curve representing U.S. exports to China: 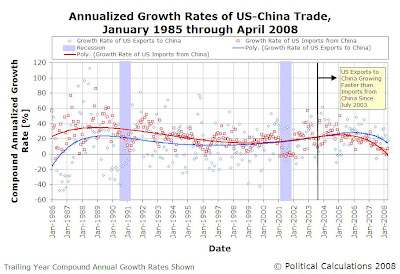 One of the more interesting discoveries that we've stumbled into is that the growth rate of trade between countries can provide an indication of its overall economic health. In our working hypothesis, once trade between nations is well established, should the annualized growth rate of a what a nation imports into its domestic economy drop to zero or become negative for an extended period of time, the likely cause of that result is that the nation is experiencing a significant economic slowdown.

According to our hypothesis, as the economy slows, the rate of growth of imports should also slow as people tighten their belts and spend less of their disposable income on consumer goods while domestic manufacturers also reduce their consumption of imported unfinished goods, to coincide with their lower rate of economic production.

As we see in our chart above, the compound annual growth rate at which China has been importing goods and services from the United States has been slowing since peaking in January 2006. We also see that the rate of decline is becoming more steep as time passes.

This steepening decline correlates well with the increase in transportation and shipping costs as international trade becomes more expensive with higher oil prices. Meanwhile, we do see that China's stock market would seem to be anticipating much less growth:

We'd really like to weigh in on whether China's Shanghai Composite stock index is going through the burst of a bubble, but at this writing, we lack the necessary historic dividend data to accurately make that determination.

Update: After being shielded from world market prices for years, the spike in gas prices is about to hit the Chinese consumer. It would seem the Chinese economy is about to slow down much faster. (HT: King Banaian)!