When we last looked at the present odds of the U.S. being in recession, we found that the likelihood of a recession was beginning to wane. Two weeks later, the odds as determined one year ago using a method developed by Jonathan Wright that the U.S. would be in recession right now has plunged below 40%, after previously peaking at 50% back on 4 April 2008: 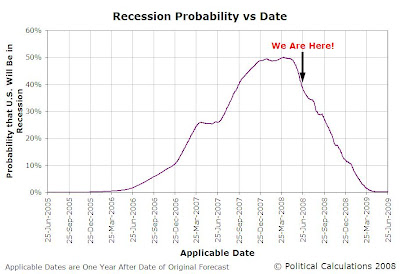 More about Wright's Model B method for determining the probability of recession one year into the future here.