This past weekend, we received an e-mail pointing to this video of the Financial Times' John Authers, who points to Intrade's recession market, stock prices and manufacturing exports as signs that the risk of recession taking place in the United States this year is fading. Meanwhile, on Monday, U.S. Federal Reserve Chairman Ben Bernanke offered a similar assessment that a substantial downturn is now highly unlikely, so we thought we'd take a moment to add our own short view to the FT's and the Fed Chairman's.

Why not? Our view on these things is at least as good as these guys!

Our primary measure of recession risk currently shows that the odds that the U.S. would be in recession at this point in time is now dropping rapidly from its peak on 4 April 2008 of 50%: 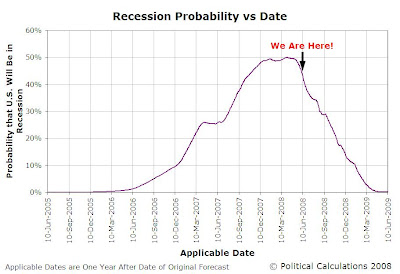 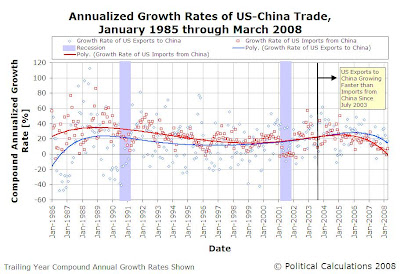 This increase in Chinese exports to the U.S. contradicts a recession if our hypothesis that a slowing economy would demand less of the things China produces (consumer electronics, toys, clothing, etc.) is correct, but that doesn't rule it out the possibility of recession either. Here, we'll need more data points in the months ahead to confirm if either a recession or a recovery from an economic slowdown is the dominant trend in the U.S.

Finally, there's the matter of the stock market. Here, the order that we see emerging following January 2008's disruptive event is not indicative of a recession, but that insight deserves its own post, which we'll tackle in the very near future.