What do you think you would see if you animated the trajectory of the S&P 500 during the course of the Great Stock Market Bubble of the late 1990s?

Well, if you're us, and you've previously drawn upon the work of both Copernicus and physicist Niels Bohr to describe insights into the nature of the stock market, seeing the phenomenon of Brownian motion should almost be expected!

As a quick review, Brownian motion is best described as the random motion of particles suspended in a fluid that is caused by the particles beng struck by individual molecules or atoms within the fluid itself. A rather famous paper by Albert Einstein back in 1905 proposed a method by which it would be possible to confirm the existence of atoms and molecules that relied upon the phenomenon to do so. In fact, Jean Baptiste Perrin built upon Einstein's theoretical work in this area to finally experimentally confirm the discontinuous nature of matter in 1913, for which he eventually won the Nobel Prize in Physics in 1926.

Now, how does all that matter to the stock market?

It's long been established that changes in stock and bond values are best described as being a kind of Brownian motion, which is represented in the randomness apparent in how their values change over time.

In this case however, the changes in stock and bond prices are affected by the unseen forces of buying and selling in the markets. In the case of a stock market bubble, or other disruptive event in the market, instead of progressing in an orderly fashion as we've previously established, that order breaks down and would appear to result in unadulterated Brownian motion. We've illustrated this using the animated chart below for the S&P 500, showing the average monthly index value against its corresponding trailing year dividends per share during the period from April 1997 through June 2003, the timeframe for the Great U.S. Stock Market Bubble:

The final dark line in the animation indicates the reemergence of order in the stock market after June 2003. Here's our original chart indicating the dates for a number of the points: 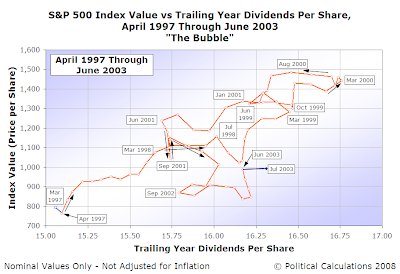