Eighty-seven year-old and nearly one-legged economics professor John Palmer has only taught finance twice in the last twenty-four years, or rather once twenty-four years ago and once again last year, but wonders how he might ever teach the efficient markets hypothesis part of the course ever again with a straight face.

The core of Dr. Palmer's problems with the efficient markets hypothesis (EMH) is that it doesn't appear to explain how investors reacted to signs of building distress in the housing and financial markets. He asks a number of good questions:

If the efficient markets hypothesis holds, and if investors are generally rational maximizers with rational expectations, then how did the current financial situation evolve? Why was there so much systematic error or bias for so long in investors' assessments of assets? Why were there not more smart people betting against the trend and the euphoria of the markets? And why didn't these contrary bets play the auto-correction role normally expected in financial markets?

He wonders why, even after information indicating the seriousness of problems affecting the housing and financial sectors of the economy surfaced that investors seemed to continue behaving irrationally, in contradiction to what the EMH would predict:

It is really hard to preach and teach EMH and rational expectations when so few people bet so little against the market, especially after the Northern Rock debacle over a year before the market meltdown. Why did it take so long for stock indices to drop and for the housing derivatives market to be exposed as the modern-day equivalent of the emperor's new clothes? Posner and Becker attempt to answer these questions, but even they are not sure (still, their thoughts on this topic are still worth reading).

Even if prior to the summer of 2007, people did not see the housing crisis coming and did not raise their eyebrows about all the NINJA mortgages, the weird derivatives, and the alleged insurance schemes backing them, why didn't the Northern Rock episode set off more alarm bells?

Is there a chance that the episode did, indeed, ring alarms loudly but that decision makers continued to gamble, hoping to get out of the market before the others did? After all, stock market indices continued to rise until October, 2007, indicating that most people seemed unconcerned about the possibility of imminent collapse of the house of cards.

In truth, the stock market did provide two separate signals in the months ahead of January 2008 that order in the market was breaking down. Here's our chart showing the period from June 2003 through December 2008: 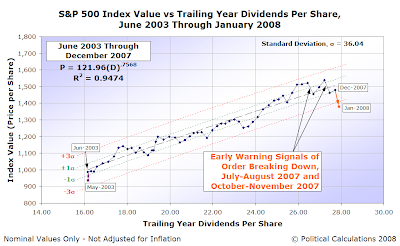 The first early warning signal came between July 2007 and August 2007. The second early warning signal came after the market peaked in October 2007. Given that the kind of sizable shifts you see in this chart often precede large disruptive events, that's about as clear a signal as you can get that the market was, in fact, anticipating significant trouble ahead. That trouble arrived as order in the stock market finally broke down in January 2008.

So, the question becomes why did investors stay in the same investments after seeing these warning signals?

Here's how. In a lot of ways, investors are a lot like teenagers at a party at one of their friend's houses where the parents are out of town, but are on their way back. A good number of the kids at the party know that, but don't know exactly when they're going to show up.

So, they keep partying because they might miss out on the fun that's going on. And the later the party goes on, the more fun there is to be had.

A few kids leave early, having had enough fun. Others are out to get every last drop of fun they can, partying harder and harder as it gets later and later. And then the parents show up, just after midnight, and everyone runs.

In other words, they're rational maximizers. They receive at least a marginal benefit from staying at the party, even though they know it's going to come to an end, badly. We strongly suspect the stock market works much the same way, with investors rationally expecting to make just a little more on their investments before having to pull the plug on them.

In fact we know so. Here are the immortal words of former Citibank CEO Chuck Prince as reported by the Financial Times' Henry Kaufman (HT: KevinT):

In an interview with the Financial Times, Chuck Prince, chief executive of Citigroup, made this insightful remark: "When the music stops, in terms of liquidity, things will be complicated. But as long as the music is playing, you got to get up and dance. We’re still dancing."

The end of the dance party came in January 2008, after the focus of investors turned away from whether or not companies would hit their anticipated performance targets in the fourth quarter of 2007 and instead to whether they would hit any of the projected targets for 2008. The answer to that question was no and stocks began falling, initiating the early phases of the disruptive event in which we find ourselves today.

And so we see that the market was indeed efficient, investors were rational, and yet stupid.

John Palmer takes a parting shot at explaining why investors might have acted so stupidly in retrospect:

Or is it possible that people saw the meltdown coming but expected that, as has happened, the gubmnt would bail out the major mortgage and derivative insurers (and many but not all of the holders of this wacko paper)? Perhaps the EMH is still a pretty decent theory unless the gubmnt is involved in some major fashion.

We observe that any expectation involving anything to do with government is neither efficient nor rational and is, to put it mildly, really stupid.