Here's the latest (through September 2008) showing how the decelerating economies of both the U.S. and China are resulting in much slower trade growth between the two nations: 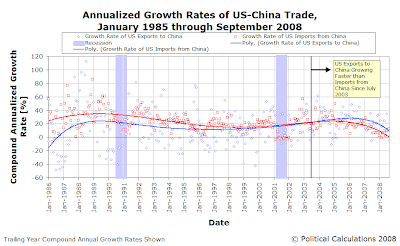 For the month of September 2008, we see that the growth rate of China's exports to the U.S. are currently surging, even though the overall growth rate is nearing zero. The current surge is a seasonal pattern - with so many consumer goods produced in China, many are shipped to the U.S. in advance of the Christmas shopping season. Typically, China's exports to the U.S. peak in the month of October for any given year, with September often close behind.

That seasonal surge however is not enough to offset the overall trend we see. Here, we see that the growth rate of China's exports to the U.S. are now approaching a level of zero, which confirms that the U.S. economy has slowed dramatically. By contrast, a growing economy demands more goods, which results in the level of imported goods growing over time.

Looking at the reverse direction, we find that U.S. exports to China plunged in September 2008, with the trailing year growth rate falling in negative territory. This indicates that the value of U.S. goods and services exported to China for September 2008 is less than that of a year prior. As we see, this happens periodically, with the last negative growth rate recorded in July 2007.

Looking at the trend of U.S. exports to China, we find that it is slowing but still in positive territory. This indicates that China's economy is still growing, although at a slower pace than it had been previously.