With the U.S. automakers now in line for aid from the federal government, we thought it might be valuable to present the following four square chart, which depicts the typical historic interaction between the strength of the economy and how well Detroit satisfies consumers in the U.S. with the outcomes they produce for management, workers and the future of the auto industry (click for a sharper image): 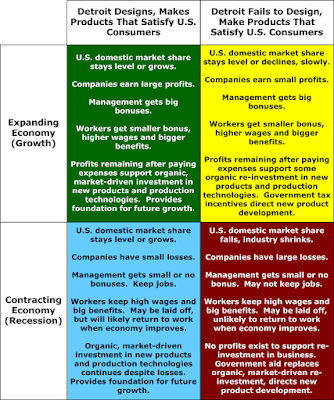 For most living Americans, Detroit has never been anywhere but in the yellow and red corners of the four-square diagram above.

Now, ask yourself: "If Detroit has always been in the right half of the four-square chart above as a result of consistently failing to design or make products that satisfy U.S. consumers, even in good economic times, what are the odds that fully substituting consumer-driven demand with government mandates in return for receiving a bailout to continue operating is something other than the completion of Detroit's death spiral?"

Asked a different way, how would making the cars the government mandates the carmakers to build to satisfy political special interest groups instead of the cars U.S. consumers might actually want to buy somehow produce a thriving domestic auto industry?

Felix Salmon has the right idea: specialization. Detroit needs to target those specific niches within the U.S. market where it can deliver outstanding products that consumers are willing to buy and restructure itself to serve those niches.

Speaking of which, if anyone wants to know what niche would satisfy us as a U.S. consumer, it's this one....

Sigh. If only Detroit were looking to go out with a bang rather than a whimper, we wouldn't have to settle for a British import. And then we could finally get this comeback to work in real life:

Speaking of which, the Mystery Science Theater 3000: 20th Anniversary Edition is available at Amazon. For real MST3K connoisseurs, we recommend The Essentials, which includes the very seasonal Santa Claus Conquers the Martians and our favorite modern Xmas standard Let's Have a Patrick Swayze Christmas (lyrics here).