Today's Employment Situation report for November 2008 revealed that some 533,000 individuals are no longer counted as being employed on a non-farm payroll in the U.S. as compared to a month ago, after adjusting for seasonal factors. But what happens when you look at the total employment numbers?

Between October and November 2008, 75,000 young adults between the ages of 20 and 24 years old are no longer counted as being employed, which represents 11.1% of the monthly decline of 676,000. These individuals represent 9.3% of the entire U.S. workforce, which is unchanged from the previous month. 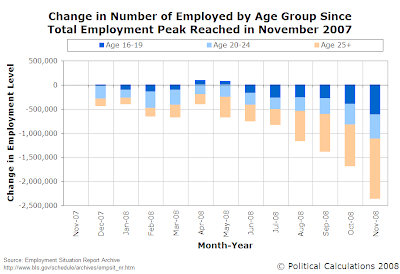 Let's next put those monthly figures into a larger context. While the NBER has identified December 2007 as the month in which a recession began in the United States, coinciding with the peak of non-farm payroll employment, we'll instead show the change in total employment since November 2007, the month that this figure peaked. This way, we can capture whatever contribution the economy of December 2007 itself might have had upon the overall employment trend toward recession.

The high percentages for the Age 16-19 (26.2%) and Age 20-24 (21.2%) groups are especially interesting, in that these figures are pretty close to these age group's respective representation among all workers earning the federal minimum wage in the U.S. 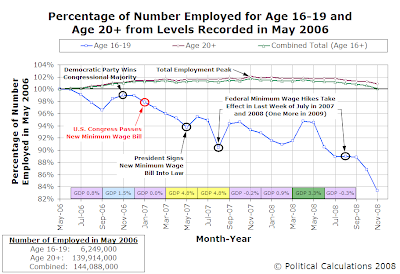 All this puts the current number of employed individuals roughly at where it was in May 2006, when teen employment peaked at 6,249,000 (the level as of November 2008 is 5,212,000.) The following chart shows how employment levels for the Age 16-19 and Age 20+ groups have changed from May 2006 through November 2008 as a percentage of the employment levels recorded in May 2006, which we present against the backdrop of GDP levels and minimum wage milestones recorded during the period.

Finally, we recall our words from 7 April 2008, in which we tweaked Larry Kudlow for his recognition that a recession was brewing (emphasis ours):

Since the minimum wage across the United States has been increasing, with a number of state's increasing their minimum wages effective in January 2008, and is scheduled to increase at the federal level in July 2008, we can expect the U.S. unemployment rate to peak for the year in November or December, given the roughly six month lag between when a minimum wage increase takes effect to when jobs or hours are cut back.

Most jobs so affected will be entry level positions at the small business level. Nationally, these individuals of ages 15 through 24 will account for the vast majority of the ranks of the unemployed.

Unfortunately, one of the major political parties in the United States is firmly opposed to doing anything that might lower the rate of unemployment this year, especially for young people. At least, until after the election. Maybe.

We'd make one change in that statement, since we've since demonstrated that employers don't wait six months after minimum wage increases occur before taking steps to reduce the impact of these mandated cost increases imposed by government upon their businesses. Instead, they begin reacting as soon as they know the likelihood that the increases will occur. We still have to see if the last part of that particular prediction is on track.