But where I may disagree with some of my colleagues is in their presumption that wage or price rigidities are the core frictions that are responsible for producing the present situation. I have in my research instead stressed technological frictions. For example, when spending on cars abruptly falls, there is a physical, technological challenge with getting the specialized labor and capital formerly employed in manufacturing cars into some alternative activity. In my mind, it is a mistake to pretend that any federal program is capable of immediately re-employing those resources into an alternative, equally productive enterprise.

Having devoted a great deal and effort toward solving these specific problems, that of how labor and capital can be productively re-employed from one use to another to maximize their economic return, we can confirm that government spending is next to useless for addressing the immediate challenges related to these situations, nor is government spending particularly effective in doing so in the long term.

Why? The politicians and bureaucrats who direct such efforts lack the knowledge of what it really takes to both make and sell the products and services adversely affected by such an economic situation. In nursery rhyme terms, they can't put Humpty Dumpty back together again the way he was before. Worse, the kind of spending they would need to do is not the kind that they want to do, so it just doesn't happen in any meaningful way. 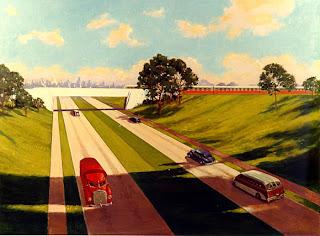 That's a problem of their incentives. Politicians will spend almost any amount of money for the sake of making a big, flashy show of how great they are, but won't spend a dime on low visibility programs, unless their campaign contributors who benefit from such spending want them to have low visibility. For example, they'll build a superhighway and maybe name it after themselves, but they'll neglect maintaining its overpasses until something breaks or someone dies as a result of that neglect, hoping they'll be long gone before it becomes a problem that comes back to haunt them.

So what should government do? Perhaps the single most useful thing politicians and bureaucrats can do when faced with an abrupt or persistent downturn in economic activity is to reduce the government-imposed costs to businesses of doing business. That's it. That could be directly, as in the case of tax rates, or that can be indirectly, as in the case of the cost of complying with an ever-increasing number of government-mandated regulations. We're often amazed at all the extra costs that artificially inflate what it takes to actually operate a profitable business that result from having to satisfy or demonstrate compliance with government rules and regulations.

If you think that doesn't leave much for politicians and bureaucrats to do, you're right. The thing is that they can't actually do the things that need to be done to re-employ both specialized labor and capital. The limits here are imposed by design: to be able to be quickly and easily re-deployed to maximize their economic return, both labor and capitals need to be capable of being quickly and easily re-deployed. That means they need to have more than one specialized application. 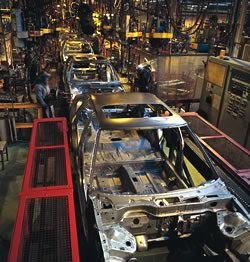 By contrast, U.S.-based automakers have only taken limited steps to establishing this kind of production capability here in the U.S., even though they have in the production facilities they operate elsewhere in the world. Simply put, it costs more to create an adaptive production line than it does to create a single-purpose production line, which cannot be offset by savings in the cost of labor from more flexible production. One major reason Detroit hasn't pursued investing in adaptive, flexible production lines in the U.S. is specifically because of their higher cost of doing business in the U.S, in large part due to the high costs imposed by restrictive work rules negotiated with the automotive labor unions. 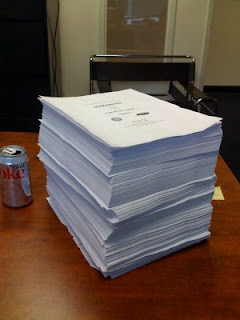 Those work rules are particularly burdensome, as they simultaneously force specialization in single skills upon workers, which ensure that they're less capable of being re-employed in a production downturn, while also specifying what labor is required to produce vehicles, increasing the cost of production. The costs imposed by these restrictions are so great, in fact, that the return on investment from establishing fully flexible production lines is too low for the U.S.-based automakers to pursue in the U.S.

The result guarantees that what Jim Hamilton calls technological friction will prevent a rapid economic recovery for the industry. That, in a microcosm, is why re-employing both labor and capital in the current economic downturn will be made more difficult as a result of the actions the politicians and bureaucrats are taking.

We can confirm for you that our solution to the problem of re-employing labor and capital works. If widely practiced, it would lead to an economic recovery much more quickly. The problem is that we're up against a bunch of people whose leaders apparently believe they should fuel hysteria about the state of the economy as they would only care for their own profit.