Political Calculations
Unexpectedly Intriguing!
02 March 2009
Are Stock Prices Too High or Too Low?

The question for investors today: Is that too high or too low?

That question arises as Jim Hamilton has reviewed Robert Shiller's concept of the "perfect foresight stock price", which Shiller introduced in a 1981 paper, and applied it to two basic scenarios. First, he compared Shiller's "perfect foresight" scenario, assuming a growth of stock prices consistent inflation-adjusted growth rate of 2% for dividends against the historic performance of stocks since 1871, finding that:

... under the hypothesized scenario, we have just come out of a 20-year episode during which stocks were "overvalued", but got back to a situation where they were again undervalued when the S&P500 fell below 830.

Hamilton next asked a classic "what if" question. What if the growth rate of dividends followed the same track they did during the Great Depression from today's levels? Here, he considers what would happen to stock prices if what happened between January 1931 and January 1936 were to occur again, finding:

If we're about the enter Great Depression II, stocks are still overvalued, and the S&P500 would have to fall another 19% [all percent calculations reported here are logarithmic changes] to get down to 608, the value at which investors could again anticipate a 5.5% real rate of return given the horrible news ahead on dividends. This alternative path for P*(t) doesn't get back to the current value for the actual S&P (which closed at 735 on Friday) until 2016.

The question again: Are stock prices too high, or too low? 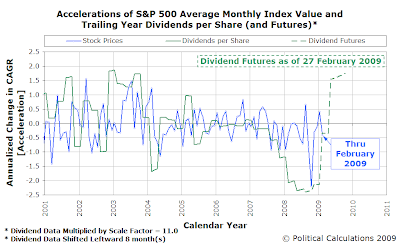 Here's what we observe in today's market. The change in the growth rate of stock prices are, at present, very closely following what investors expect will happen to the growth rate of dividends. Here's our latest evidence of that contention, through the close of trading on 27 February 2009, as seen in the chart to the right.

We observe that the change in the growth rate of stock prices continues to be consistent with what investors expect will occur with the growth rate of dividends going into the fourth quarter of 2009. With that being the case, absent additional changes to the expected level of cash dividends to be paid out by the companies of the S&P 500 into the reasonably foreseeable future, we find that stock prices are going pretty much right where we should expect them to be.

And that reasonably foreseeable future indicates that we can reasonably expect the downward trajectory of stocks to slow and reverse in the very near future.

Update 2: The stocks cutting their dividends are General Electric (GE), International Paper (IP) and PNC Financial Services (PNC). Given their high weighting in the S&P 500 (and also their presence in the Dow Jones Industrials), the changes at GE and IP are the big drivers behind today's action.