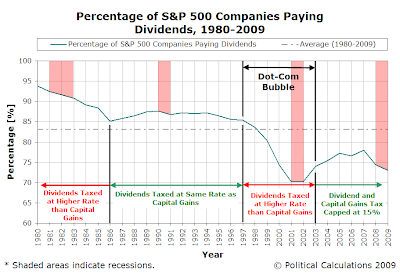 What affects the percentage of dividend paying companies in the S&P 500?

To answer that question, we turned to Standard and Poor's Indicated Dividend Change spreadsheet, which provides the data for the number of dividend paying companies in the S&P for each year since 1980. We've taken that data, combined it with some significant milestones and presented it in the chart in the upper right hand corner of this post.

That changed again with the Taxpayer Relief Act of 1997. Here, the capital gains tax rate was reduced from 28% to 20%, while the tax rate of dividends was held at the 28% level. As we can see in the chart above, this change in tax law coincided with a dramatic drop in the number of companies within the S&P 500 that paid dividends.

That situation reversed in 2003, with the passage of the Jobs and Growth Tax Relief Reconciliation Act, which once again equalized the tax rates of both capital gains and dividends, but this time at 15%.

But, these rates have a sunset provision - they will only continue at the 15% level until 2010, when they will then revert back to much higher levels. Without an act of Congress, based on what we see in the correlation of the tax rates for both dividends and capital gains, it's likely that companies paying dividends will become more scarce after that time.