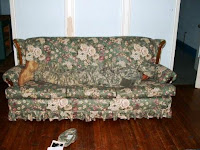 In evolutionary terms, it's easy to understand why so many animals have developed coloring or texturing that allow them to remain nearly invisible in their native habitats. This kind of camouflage gives them a competitive advantage that other members of their species might lack, which first helps to aid their own survival against predators while also helping ensure the survival of their offspring. Over time, the adaptation for protective coloring spreads over the entire population of the species.

But what about people? It's no surprise that camouflage has long been used by hunters to be successful in their pursuits, not to mention its obvious utility in military applications, but what other places might the ability to better blend into one's surroundings provide a similar competitive advantage?

Would you believe in the crease in front of the net in hockey? Via Core77: 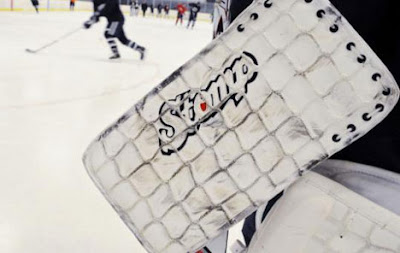 High school senior Trevor Leahy has used design to give him a slightly unsportsmanlike advantage: Combining skills he learned in a graphic design class with readings on Darwinism and camouflage, hockey goalie Leahy has developed a set of goalie pads that resemble the very net he's guarding.

"When the shooter comes down and only has a split second to shoot the puck, they're looking for net," said Leahy, a senior from Hampton, N.H., who grew up in Byfield. "If you put the net on the pad, they'll shoot at the pad instead of the goal."

So far, Leahy has logged two shutouts with the pads. In practice, two of Pingree's top scorers say, the illusion is particularly effective when there's a scramble in front of the net and they need to shoot quickly... [Opposing players] say they have fired the puck directly into Leahy's pads. The illusion diminishes if they are farther from the net, with more time to shoot.

Leahy, who had the pads custom-made by a Canadian manufacturer, has applied for a design patent."

Theoretically, if the early observed level of success continues, we should see other goalies begin adopting the same kind of camouflaged goal patterns on their pads in short order. Better still, we should also expect how hockey is played to change as well. For example, we might expect longer shots on goal become more frequent than they are today because the opposing players would be more likely to score.

Or more interestingly, perhaps they could turn the tables and evolve their own form of camouflage to get closer to the net, undetected.

What lessons can we learn from the humble boxfish when it comes to designing more fuel efficient cars? We find out in our original post Rediscovering Nature!