Are there conditions, however rare, under which market adjustment and convergence does not occur? If a few of the vertices get stuck, can it become impossible for the economy to fulfill its mutating pinwheel program of change and adaptation?

To which, the ever-quippable Ironman at Political Calculations commented:

I would think yes. A series of disruptive events could prevent order from re-emerging. A realistic example of that would be an initial shock, followed by others or, more likely, a series of responses that prevent a new equilibrium from forming.

We hate it when Ironman* goes out and makes statements like this, because that means that we end up with a lot more work to do, especially when we haven't already done the work to back up Ironman's wild claims yet. 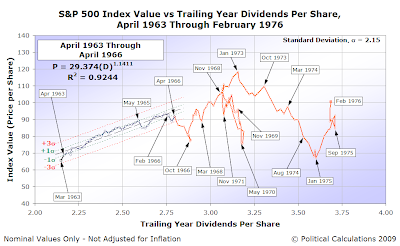 And now that Ironman has put us on the hook like this, we have to ask: are there any examples of anything like a series of disruptive events that acted to prevent the return to order (aka "convergence") in a market? Fortunately for us, we have a case study: the U.S. stock market from April 1963 through February 1976.

As a side note, we find that this period, perhaps more than any other we've reviewed to date, most closely resembles the period from June 2003 onward in which we find ourselves today. That said, here are the major events that we identify as coinciding with the milestones we marked on the chart above.

February 1976 Order resumes as the growth rate of both stock prices and corporate dividends stabilize. The long series of disruptive events affecting the stock market ends.

Today, banking, finance, and construction all need to shrink and indeed they are shrinking. Given the centrality of lending and project evaluation, is a sufficiently healthy banking sector needed for the pinwheel to properly turn? Must investors abandon their quest for liquidity to bring their information to bear on market prices?

The biggest problem out there is that far too many people are consumed by trying to put things back the way they were. In a way, it's almost like they're trying to re-assemble a cow from a truckload of hamburger - what they're doing ain't pretty, nor is it likely to be successful.

The kind of equilibrium stability theory that obsessed Franklin Fisher was written off as irrelevant some time ago. Maybe people will start looking at it again.

Well, yes, now that you mention it, some are, although I think that an econometric approach is the wrong way to go.

The problem is that a lot of econometrics tries to shoehorn real world data around a Gaussian normal distribution, which ultimately requires one to assume the underlying datapoints are statistically independent of each other. That's not how the world really works.

That approach can be useful and periodically holds, once you adopt Paretian assumptions (where power-law distributions and interdependencies hold), how prices change become lot easier to explain. Even in our current situation.

We're going to have to reign Ironman in.

We've been systematically going backwards through time to identify the major periods of order and disorder in the S&P 500. Here are the posts with our discussion, with links to the charts included in each post:

* Who is Ironman, anyway? This post is all that we have that offers intriguing clues!