Political Calculations
Unexpectedly Intriguing!
March 10, 2009
What Can Africans Do that Europeans, Asians and Americans Can't?

Or more specifically, what can Africans in Cote D'Ivoire do that European and Asian automotive vehicle manufacturers can't, and that American manufacturers don't even attempt?

Would you believe the answer to this question is "make buses that work well in Africa"? (HT: Core77):

Anyone who's traveled by bus in sub-Saharan Africa is probably familiar with the curious combination of modern and ancient technology this entails. The buses, usually purchased second-hand from European or Asian manufacturers, are subjected to loads and road conditions for which they were never designed while being detached from the maintenance infrastructure for which they're intended, resulting in a lot of very spiffy, falling-apart vehicles.

The West African nation of Cote D'Ivoire (Ivory Coast) has addressed the problem by building their own. Sotra, the national transport company, has an engineering arm that has undertaken not just the manufacture of new buses domestically, but a local re-design that results in something more appropriate to the crowds and rough roads they're likely to see. Modifications include a more robust chassis, and reduced seating in urban commuter buses, enabling them to accommodate more standing passengers. 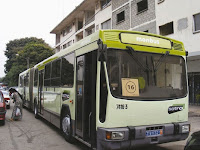 We believe this is a classic development story on a number of different levels, as it contrasts so successfully what works with what doesn't work when it comes to improving the lives of people living in some of the worst conditions of the world, including poverty and civil conflicts. We thought we might take a closer look just two of the elements at work in this story.

Central planning vs distributed or local knowledge: The central planners in this case are represented by the automotive vehicle makers of Europe, Asia and America, who despite their concentrated expertise, never-the-less failed to ever understand just what a successful mass transit vehicle for Africa should be like. Being so far removed from the place, there is simply no way they could appreciate the conditions under which the vehicles they supplied to Africa would need to operate.

Consequently, they were all too willing to continually supply a stream of vehicles that were destined to fall apart well before their "native" lifespan would ever be reached. It would seem then that the best laid plans of the world's top experts in making mass-produced mass transit vehicles was no match for the more limited, but very specific knowledge of the people who would be using them.

Foreign aid vs local entrepreneurs: For this part of our discussion, the world's mass transit vehicle makers represent what we'll call the "foreign aid industrial complex." Here, let's ask a very simple question: Why did the world's mass transit vehicle manufacturing firms never develop a vehicle that could successfully hold up over time to the kind of conditions they would see in Africa?

The scary answer to that question is that they had no incentives to develop such a vehicle. In fact, they had every incentive to supply the kinds of vehicles they were already making, without any meaningful modifications.

Here's why. Since the vehicles these firms were exporting to Africa would be much more likely to fail much more quickly than their domestically-operated counterparts, they would need to be replaced much more frequently. As these vehicles failed, they would be replaced with the exact same product that had already proven that it wasn't capable of succeeding well over time for the people it was intended to serve. This, in turn, would mean greater profits for the firms, since the marginal cost of producing extra vehicles would be very small by comparison to developing a more sustainable vehicle design that would actually work, or rather, deliver on its promise to the people it was intended to serve.

How many times has the "foreign aid industrial complex" failed to deliver on their promises of a better future for the people they try to help? How many times have their failures been repeated because they have no incentives to actually solve the problems involved and are perversely incented to keep pushing the same solution: more foreign aid?

According to the BBC story, the first three hit the streets last week, and orders are already rolling in from neighboring countries, with production expected to scale up 300 units a year eventually. Especially remarkable is the fact that all of this was achieved while Ivory Coast was locked in a political crisis precipitated by a recent civil war.

Not only are better buses now rolling out onto the roads of western Africa, Cote D'Ivoire is becoming better because of its entrepreneurial drive. It would seem that the key to sustainable success in the developing world really arises from entrepreneurs being free to solve problems in the places they are.