President Barack Obama and the Democratic Party majority in the U.S. Congress are committed to allowing the federal income tax relief first passed in 2001 to expire after 2010, which will result in nearly everyone's tax rates in the U.S. rising when they do. Our question today: Which taxpayers are going to get shafted the most when that happens?

It's very likely not who you think it is: 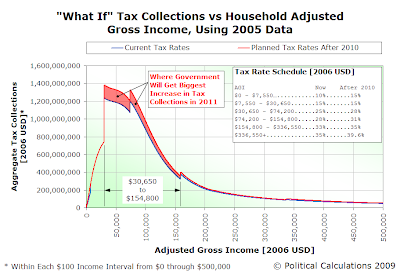 To create the chart above, we used our model of the distribution of U.S. household incomes from 2005, multiplying the aggregate incomes by the tax rates that would apply under current law and after 2010. From this chart, we see that those earning between $30,650 and $154,800 will be providing most of the increased revenue the government hopes to collect.

We'll note that we used the income thresholds that apply for taxpayers filing as Single, which means that we're overestimating the amount of taxes that would be actually be collected. We justify doing so because we're more interested in the magnitude of the change from applying the different tax rates, which provide a very clear picture of the income ranges from whom the government will be collecting most of the expected increase in tax revenue resulting from the higher tax rates.