Political Calculations
Unexpectedly Intriguing!
May 20, 2009
Debt as a Giffen Good

Giffen goods are highly elusive things. Named after Sir Robert Giffen, who first proposed their existence, Giffen goods are unique in that as their prices rise, people respond by demanding more of the good in question.

By contrast, given the way the forces of supply and demand usually work, when the price of a good rises, people respond by demanding lower quantities of the good.

To understand why Giffen goods are different, let's take a closer look at the conditions that makes a Giffen unique (excerpting Wikipedia) in leading their quantity demanded to rise in response to an increase in their price:

There are three necessary preconditions for this situation to arise:

If precondition #1 is changed to "The good in question must be so inferior that the income effect is greater than the substitution effect" then this list defines necessary and sufficient conditions. As the last condition is a condition on the buyer rather than the good itself, the phenomenon can also be labeled as "Giffen behavior".

Unfortunately, Giffen goods are rarely found in the real world. Wikipedia explains why:

Giffen goods are difficult to find because a number of conditions must be satisfied for the associated behavior to be observed. One reason for the difficulty in finding Giffen goods is Giffen originally envisioned a specific situation faced by individuals in a state of poverty. Modern consumer behaviour research methods often deal in aggregates that average out income levels and are too blunt an instrument to capture these specific situations. Furthermore, complicating the matter are the requirements for limited availability of substitutes, as well as that the consumers are not so poor that they can only afford the inferior good. It is for this reason that many text books use the term Giffen paradox rather than Giffen good.

It occurs to us that, under certain circumstances, debt might be considered to be a Giffen good. Let's go through each of the three conditions necessary for a Giffen good to exist to see how debt stacks up.

Debt as an Inferior Good 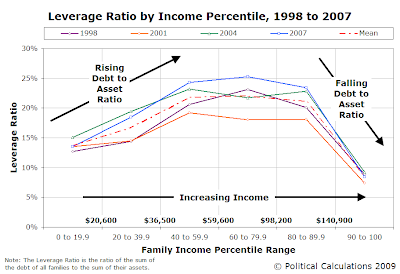 To qualify as an inferior good, an individual's demand for the good must decrease as their income rises. Keeping that basic definition in mind, we turned to the Federal Reserve's Changes in U.S. Family Finances from 2004 to 2007: Evidence from the Survey of Consumer Finances. The chart to the right presents the leverage ratio for U.S. families according to their income percentile for the years 1998, 2001, 2004 and 2007, which we extracted from Table 12 of the Fed's study.

What this relationship suggests is that debt does indeed qualify as being an inferior good.

A Lack of Substitutes for Debt

Having established that debt qualifies as being an inferior good, we'll next consider what substitutes might exist for it. We'll do that by returning to debt's characteristics as an inferior good, and consider the answers to two pretty simple questions:

We observe in our chart of leverage ratios with respect to household income, that as households see their incomes rise or as they accumulate assets, they don't take on higher levels of debt. This makes sense since these households might either opt to pay cash for things out of their flow of income, or they might sell assets they already own to cover part or all of the cost of the things they might wish to acquire. In both cases, they have the ability to take on more debt, but choose not to do so, because they prefer these other options to it.

However, households at lower income levels would appear to lack these alternative means of acquiring goods, or at least have much less alternative options to work with compared to households with greater levels of income and assets, which confirms their lack of close substitutes to debt for the lower income households.

Debt Consumes A Significant Portion of Income, But Not Too Much 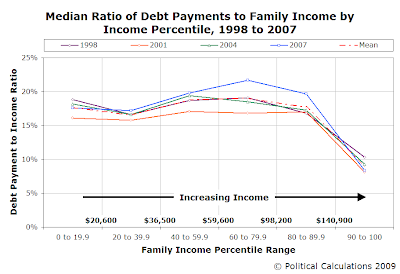 This third and final condition is almost redundant at this point, but we can firm that debt consumes a significant portion of income, but not too much, by returning to the Fed's study of consumer finances and looking at the median ratio of debt payments to family income percentile, which we've presented in the chart to the right.

The chart confirms that for lower income families, the median ratio of debt payments to their household income ranges between 16 and 22% up into the range of the 60th and 80th percentiles for household income. Above this level, we see the ratio of debt payments to family income fall, but we confirm that debt does indeed consume a significant portion of income, but not too much.

Having established that debt qualifies as being a candidate for being a Giffen good, let's consider the evidence that consumers respond to an increase in the cost of debt by demanding greater quantities of it. Here, we identify a unique circumstance that does indeed transform debt from simply being an inferior good into a Giffen good: when after a period of falling interest rates, interest rates (or rather, the price of debt) begin to rise!

The following news articles from recent years reveal the increase in debt demanded as the cost of debt increases during these times:

In each of these cases, the borrowers were seeking to acquire debt as they anticipated having to pay a higher cost for the debt later (in the form of higher interest rates) if they delayed. As a result, the increases in the price of debt drove an increase in the quantity of debt demanded.

Admittedly, the situation we describe is of only limited duration, however it cannot be denied that it does occur and does result in debt becoming a Giffen good. And if so, the most common.