Last week, we had some fun at both the Federal Reserve's and U.S. Senate's expense, giving their recent visits to our site a "Dewar's profile"-style treatment.

They were both back again today: 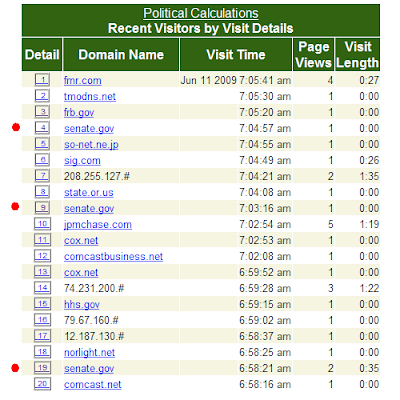 The Fed (frb.gov) was here for the sake of using our tool that predicts the level of mortgage rates given the 10-year Treasury yield (or vice versa) to solve what Tracy Alloway of FT's Alphaville calls "Bernanke's Conundrum".

The Senate meanwhile, started out with that tool, but then found another tool that they would appear to think is more interesting:

It's not so much that they found that particular tool, so much as they kept going back to it that we find interesting. When you consider that many of their previous visits have been for the purpose of answering the kinds of questions that politicians considering raising income taxes would like to have answered, hopefully you can make the connection as to what's in the works and certainly has been since at least 13 January 2009. Before President Obama assumed office and really cranked open the federal government's deficit spending spigots.

And once again, we're in the position of being able to say "You can't say you weren't warned...."