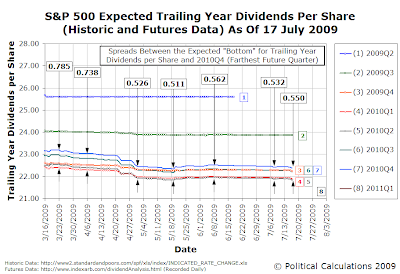 We might see quite a bit of action in the stock markets tomorrow, as the dividend futures for 17 July 2009 have unexpectedly dropped without any corresponding news to indicate why. The chart to the right shows the projected trailing year dividends per share for each quarter between now and the fourth quarter of 2010 based on the dividend futures data we've tracked since 16 March 2009.

The sudden dip at the end may ultimately turn out to be a short-lived data anomaly that may be corrected as early as next Monday, or perhaps represents a more serious deterioration in market conditions that would appear to be as yet flying under the radar - as we indicated, there's no news to confirm which may be the case. In the absence of any news, it will be interesting to see how stock prices might react to this change. Our guess is "not well," but we'll be happy to be wrong.

Update 9:34 PM PDT: Did we say no news? We forgot to mention this particular speculation, which Felix Salmon has also considered. Hey, it's late and so far, it's the only news that fits!

Update 17 July 2009 8:30 AM PDT: Here are the drops we see for the projected trailing year dividends per share:

We still don't see any news to indicate what's changed, so we dug deeper into the data to compare the individual dividends listed for each quarter for each stock in the S&P from what IndexArb lists today (17 July 2009), and what Google's cache shows for last Monday (13 July 2009), which we'll assume mostly holds through 16 July 2009. Here are the companies that have seen their expected future dividend payments drop during that period, at least not as a result of paying them during the past week!:

There was one increase:

What it looks like to us is that the change we observe is largely the result of JPMorgan Chase reducing what they expect to deliver for their end-of-year dividends per share. We find it interesting that there isn't a lot of news on it.

With this apparent one-time adjustment, stock prices may not be as negatively affected as might otherwise be expected if the reductions were going to be distributed among all quarters going forward. We would however still expect some downward movement in stock prices as a result of this change in investor expectations for the future income stream from dividends through the end of this year.

Update 17 July 2009 3:00 PM PDT: Once we worked out what drove the actual change, today's market action makes a lot more sense - we would expect this reduction in future dividends per share paid to only shave a few points off the level of stock prices, and sure enough, that's about the most that happened today, with the S&P 500 generally ranging between 3 and 5 points below it's previous close before closing just 0.04% below that level at 940.38.

Still, we kept digging and managed to turn up that the reason there wasn't a big news story about JPMorgan Chase announcing they were planning to further cut their dividend for just the next two quarters: they're not. Instead, we found that they instead have no plans to increase their dividend until early next year.

It would then appear that the dividend future dropped as they did purely because investors had been expecting JPMorgan Chase to increase their dividend sooner on the basis of their strong performance in recent months. The announcement by CEO Jamie Dimon that the company would not increase dividends until 2010 on 16 July 2009 put the kibosh on that expectation, and the dividend futures adjusted appropriately. They now reflect the expectation that JPMorgan Chase will begin increasing their dividend per share in early 2010.