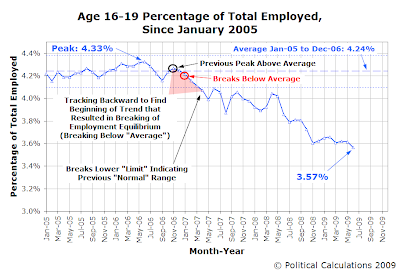 The June 2009 Employment Situation report for the U.S. is now out, and for us, that means it's time to update our look at the job situation for American teens.

We'll begin by first looking back to when teen employment last peaked, which occurred in June 2006. At that time, those Age 16 to 19 represented 4.33% of the entire U.S. workforce (defined as those Age 16 and older.) 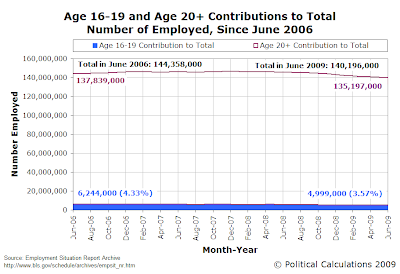 The primary factors that have driven the loss of teen jobs are the increases in the federal minimum wage of recent years beginning in 2007 and the current economic recession, which began with the peak of the previous business cycle in December 2007. 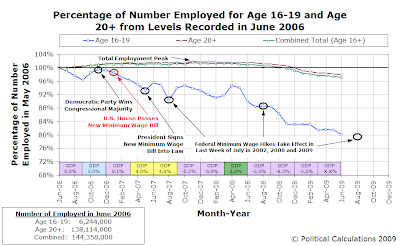 These two factors have combined to eliminate teen jobs in disproportionate numbers compared to older employed individuals as the costs of employing the comparatively unskilled teens has been forced dramatically upward while business revenues have been contracting with the recession. (You can put yourself in the shoes of a small business owner having to cope with a minimum wage increase and having to stay in business with this tool!) 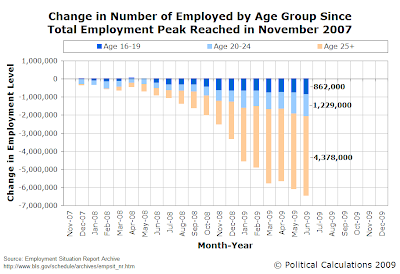 Measuring from the peak in total employment of November 2007 (the U.S. non-farm payroll peaked in December 2007, which coincides with the peak in the previous business cycle), we find that the number of teen jobs has fallen by 862,000, representing some 13.3% of the total number of jobs loss since the recession began. During that time, teens have fallen from accounting for 4.00% of the total U.S. workforce in November 2007 to 3.57% as of June 2009. Teens have therefore been 3 to 4 times more likely than their representation in the U.S. workforce would suggest to have been affected by job loss during the current recession.

By contrast, the number of jobs for young adults between the ages of 20 and 24 has dropped by 1,229,000, which accounts for 19.0% of the total 6,469,000 reduction in jobs since November 2007. During that time, these young adults have gone from accounting for 9.55% of the total number of employed individuals in the United States to 9.11%. Consequently, young adults between the ages of 20 and 24 have been more than twice as likely to have been affected by job loss during the current recession than their representation in the U.S. workforce would otherwise suggest.

We'll conclude by noting that all those Age 16 to 24 fully account for half of all those who earn the federal minimum wage in the U.S.

Update 2 July 2009, 10:20 AM PDT: The latest jobs report is being credited with today's ~2.3% (at this writing) drop in stock prices. Checking the dividend futures market and scanning the web for any news of significant cuts in dividends per share, we find there is, as yet, no fundamental reason for the drop in prices - it's purely based on speculation at this stage.

Without such a change, we believe today's market drop will be short-lived, as it would appear to be the result of speculative "noise."

That's not to say that we may indeed see another significant erosion in corporate dividends per share this year, as suggested by S&P's Howard Silverblatt yesterday. Unless that starts happening in the next several days though, look for stock prices to rebound to the level we indicated yesterday.

Update 2 July 2009, 5:42 PM PDT: Down 2.91% on the day! If we had any money on the side, we'd call that a "noisy" buying opportunity, especially since the only signal-driven news after the market close was positive.

Since we're coming into a holiday weekend, we don't expect much from tomorrow, but if stock prices stay depressed without news of companies slashing dividends, that would be a buying opportunity, assuming you haven't already taken advantage of today's activity. In the continuing absence of such news, look for stock prices to generally rise over the next week.