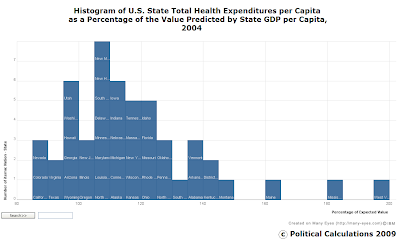 We're still playing around with the data visualization tools on Many Eyes, this time using a block histogram to confirm the disproportionately high total health expenditures per capita of Maine, Mississippi and West Virginia! The histogram we've created (interactive version here) shows just how far separated these three states are from the rest of the United States, which are otherwise concentrated most heavily around the U.S. average of 105%.

The percentage given is that provided by the ratio of the actual total health expenditure per capita for each U.S. state with respect to the value we would predict given each state's GDP per capita.

The geographic presentation of this same data is to the left. While we get a sense of the degree to which Maine, Mississippi and West Virginia stand out with respect to their neighboring states based on this measure, these charts don't convey the actual level of total health expenditures per capita for these states.

For that, we'll turn to our geographic chart depicting each state's total health expenditures per capita.

Here, we see that instead of being disproportionately high with respect to their neighboring states, the level of total health expenditures per capita for Maine, Mississippi and West Virginia are instead consistent with many of their surrounding states (the exception is New Hampshire, which has a disproportionately low level of health expenditures per capita compared to its neighbors.)

As we noted yesterday, the likely explanation for this result is that contributions from the U.S. federal government likely "equalize" the level of health expenditures per capita in these states with other states in their region.

That, in turn, would make one of the rare examples of when the U.S. government has successfully, to borrow Thomas Sowell's phrasing, "equalized upward" (HT: Mark Perry). We should note that the practical effect of the current universal health care proposals being drafted by the Obama administration and the current majority party of the U.S. Congress would be to change the emphasis from this approach to instead equalize downward.

Finally, we'll once again confirm that whenever we see levels of spending way out of whack with the levels we would normally expect based on sound economic fundamentals, the government is usually involved.