Writing in Foreign Policy, Vitaliy Katsenelson argues that China is defying economic reality and compares China's current economic fortunes with those Lucent Technology in the days of the Dot-Com Bubble in the late 1990s:

Despite everything, the Chinese economy has shown incredible resilience recently. Although its biggest customers -- the United States and Europe -- are struggling (to say the least) and its exports are down more than 20 percent, China is still spitting out economic growth numbers as if there weren't a worry in the world. The most recent estimate put annual growth at nearly 8 percent.

China's fortunes over the past decade are reminiscent of Lucent Technologies in the 1990s. Lucent sold computer equipment to dot-coms. At first, its growth was natural, the result of selling goods to traditional, cash-generating companies. After opportunities with cash-generating customers dried out, it moved to start-ups -- and its growth became slightly artificial. These dot-coms were able to buy Lucent's equipment only by raising money through private equity and equity markets, since their business models didn't factor in the necessity of cash-flow generation.

Funds to buy Lucent's equipment quickly dried up, and its growth should have decelerated or declined. Instead, Lucent offered its own financing to dot-coms by borrowing and lending money on the cheap to finance the purchase of its own equipment. This worked well enough, until it came time to pay back the loans.

The United States, of course, isn't a dot-com. But a great portion of its growth came from borrowing Chinese money to buy Chinese goods, which means that Chinese growth was dependent on that very same borrowing.

Now the United States and the rest of the world is retrenching, corporations are slashing their spending, and consumers are closing their pocket books. This means that the consumption of Chinese goods is on the decline. And this is where the dot-com analogy breaks down.

It's a provocative argument, but is Katsenelson right? How healthy is China's economy with respect to that of the United States? Is China's reported economic growth rate real? Is there a way to find out? 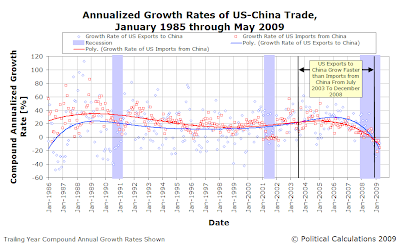 We can answer those questions. We'll first compare the relative health of both the U.S. and China by examining how the growth rate of trade between them has changed since we first indicated that China's economy had entered into recession sometime in the latter half of 2008.

The chart above reveals that the rate of growth of U.S. exports to China and Chinese exports to the U.S. have both fallen into negative territory with respect to where they were in the previous year. Significantly, we find that U.S. exports to China have been consistently falling at a faster rate than Chinese exports to the United States since December 2008, reversing the trend we observed in the period beginning in July 2003, which was driven largely by China's much faster rate of economic growth than the U.S.

We also see that at the moment, the rates at which the year-over-year change in export growth between the two nations are changing are such that the rate of U.S. export growth to China is falling more steeply than that of China's exports to the U.S. This difference suggests that China's economy is less well off than that of the U.S. That, in turn, indicates that China's reported GDP growth figure of 8% is an illusory figure, as a truly growing economy would steadily demand greater resources from all available sources, which would be reflected in international trade data.

We confirm that outlook by examining our doubling rate charts showing the level of exports from the U.S. to China, and the level of imports to the U.S. from China below:

In the charts above, we see that U.S. demand for Chinese export is following its well-established seasonal pattern, although with a greater seasonal decline due to the worsening of the current recession in late 2008. Meanwhile, we see that while U.S. exports to China have rebounded from the level they plunged to early in 2009, there is not yet sufficient evidence to indicate that genuinely sustainable economic growth in China is driving the change. Katsenelson explains why China's leaders are acting as they are to stimulate their economy as they are, as well as the different risks they're trading off in doing so:

Why is China doing this? It doesn't have the kind of social safety net one sees in the developed world, so it needs to keep its economy going at any cost. Millions of people have migrated to its cities, and now they're hungry and unemployed. People without food or work tend to riot. To keep that from happening, the government is more than willing to artificially stimulate the economy, in the hopes of buying time until the global system stabilizes. It's literally forcing banks to lend -- which will create a huge pile of horrible loans on top of the ones they've originated over the last decade.

But don't confuse fast growth with sustainable growth. Much of China's growth over the past decade has come from lending to the United States. The country suffers from real overcapacity. And now growth comes from borrowing -- and hundreds of billion-dollar decisions made on the fly don't inspire a lot of confidence. For example, a nearly completed, 13-story building in Shanghai collapsed in June due to the poor quality of its construction.

Time will tell if that Shanghai building collapse will become a metaphor for the Chinese economy at large.