After peeking into August 2009 through our crystal ball just a week ago, it would seem that the U.S stock market may be headed for a slightly better month than we had anticipated. Applying the dividend futures data in effect as of this morning to our basic math, we would project the average of the S&P 500 for the month of August 2009 to range between 1005 and 1020. Our currently anticipated range is based on the following data:

The main driving factor behind the current rise in stock prices continues to be investor expectations that things are becoming worse much more slowly than earlier this year. That expectation has largely produced the positive acceleration that has driven stock prices upward since the market bottomed on 9 March 2009. Here's an illustration of that in effect, first looking at how expected trailing year dividends per share have slowly eroded since March 2009:

These charts demonstrate that the level of expected trailing year dividends per share for the S&P 500 has generally fallen throughout the period in which we've seen the market rally (note the relative position of the bars with respect to the horizontal red line.) However, if we look at the expected change in the rate of growth of dividends per share for the S&P 500, we see that by shifting this data five months toward the future and applying our amplification factors, we can match the rate of change that we have observed for the rate of growth of the value of the S&P 500 index since the market bottomed in early March:

There are four potential factors that might result in stock prices deviating from our projections:

Our final chart illustrates the path that stock prices have taken with respect to trailing year dividends per share since December 1991, with our full month projections indicated since April 2009, when we began making such projections: 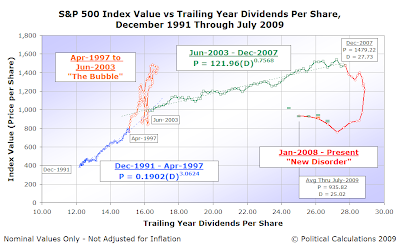