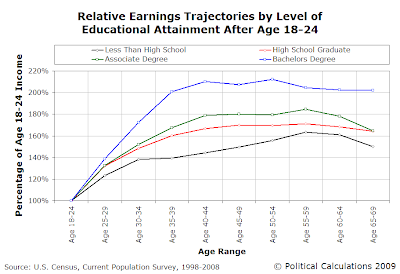 Do you have any idea how your income is likely to change as you progress throughout your career?

Our newest tool is designed to help you find out! We've averaged the average annual earnings data by level of education provided by the U.S. Census' annual Current Population Survey for the years from 1997 through 2007, adjusted for inflation, and from that, we've developed a mathematical formula using ZunZun's 3-D function finder to estimate the typical trajectory that a typical American's earnings will change year-by-year as they go from Age 25 to Age 69, according to how much education they have.

So, if you have less than a high school education, are a high school graduate (or have earned your GED), or have earned an Associate's degree in college or a full Bachelor's degree, we can work out how your income will likely change from any point in your life. Assuming, that is, that your personal income parallels the typical annual earnings trajectory that we found for those who have a similar educational background to yours.

And it all starts now! Start by entering the "starting" level of pay you received when you first started earning a full-time, year-round income between the ages of 18 and 24, select your level of education, then select the age at which you'd like to anticipate the inflation-adjusted amount of income you're likely to have. We'll have more comments below the tool....

You can use this tool at the Measuring Worth site to calculate the equivalent value of any one year's dollars into those of another year's.

If you're like most people, rather than following a smooth curve as our tool above assumes, your income will instead follow a saw-tooth pattern, which is driven by things like when you get raises or promotions, change jobs, relocate, and so on. Over time however, a rolling average of your year-to-year income is likely to follow a similar path to what the tool projects, which means that you can get results that you can use for long-term planning. If you do use this tool's results for long term planning, we would encourage you to understate your current income, which will provide conservative estimates of your income that will err on the safe side for that kind of planning.

Finally, though we've omitted the earnings trajectories for people who have earned Master's degrees, Doctorate degrees and Professional degrees (such as for doctors and lawyers), gaining these levels of education would be expected to increase your earnings above the levels projected by our tool. In most cases, by a substantial margin.

But whether any of these additional level of educations would really pay off for you is an entirely different question!