We were thinking about the history of federal minimum wage increases in the U.S. this morning, when we had a flash of inspiration: we thought of a way we could illustrate how the rate of unemployment in the U.S. might have changed in response to changes in the minimum wage in the overall context of the health of the U.S. economy at the time they occurred. 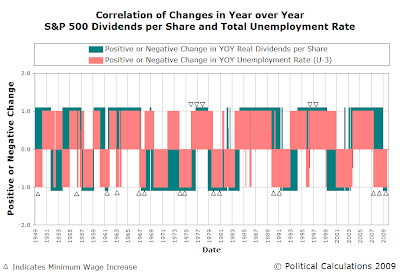 Here's how the analytical part works. When the U.S. economy is healthy, the stock market's dividends per share will rise and the rate of unemployment will fall. On our chart, that's indicated by the situation where both the year over year changes in dividends and unemployment have scored a positive value. It's during these times that we would expect that the U.S. economy can absorb an increase in the minimum wage.

When both these scores are negative, that likely corresponds to a period of recession or stagnation for the U.S. economy. This would correspond to a period in which raising the minimum wage would aggravate the unemployment situation.

Finally, there is the situation where the two measures are out-of-sync with one another. This indicates a period in which the economy is relatively weak. In these circumstances, if the U.S. economy is not in recession, raising the minimum wage might indeed spark enough job loss to push the U.S. into recession.

Examining our chart, we find the following:

The takeaway from all this is that when the U.S. Congress acts to increase the minimum wage, this action either directly coincides with the loss of jobs in the U.S. economy one-third of the time or with the continuance of job losses for another one-third of the time. And one out of five times, these job losses occur despite economic growth as indicated by growing stock market dividends.

Worse, since the U.S. Congress has historically acted to pass minimum wage increases in periodic batches, with increases occurring at annual intervals following the first increase of the batch, the situation of these additional minimum wage tend to represent an ongoing worsening of the employment picture.

So the bottom line answer to the question we asked in the post title is very likely "Yes."

Update 29 October 2009: We replaced the original chart we included with this post with the much prettier one you now see above!