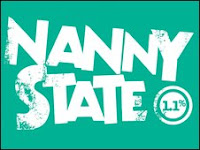 Like those found at Environmental Economics, this would be it. The cause for this occasion? It's not a late "Happy Birthday" to Guinness - instead, it's the response by one brewer to ever creeping nanny-statism. Here's the news from the BBC:

A brewery has launched a low alcohol beer called Nanny State after being branded irresponsible for creating the UK's "strongest beer".

Scottish brewer BrewDog, of Fraserburgh, was criticised for Tokyo* which has an alcohol content of 18.2%.

Campaigners welcomed the 1.1% alcohol Nanny State but said the name showed a lack of appreciation of the problem.