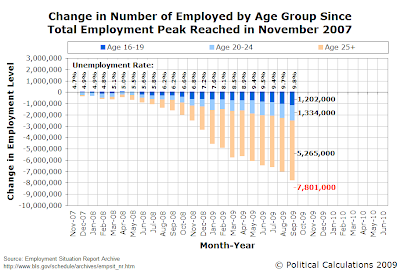 Since the current U.S. recession began in December 2007, teens Age 16-19 have cumulatively lost 1.2 million jobs, or 15.4% of the total of 7.8 million jobs that have been lost. Meanwhile, young adults between the ages of 20 and 24 have lost over 1.3 million jobs, or 17.1% of the total. When we combine both groups, we find that collectively teens and young adults account for nearly one-third of all jobs lost during the recession. 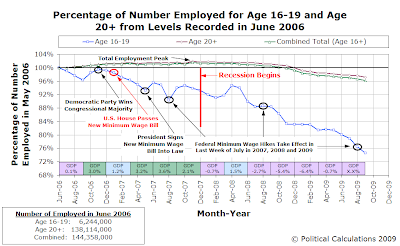 If we go back to when teen employment last peaked in June 2006, we find that Americans teens have been steadily losing jobs since November 2006, even though economic growth rates as measured by the inflation-adjusted Gross Domestic Product were positive through the end of 2008. Teen employment levels briefly surged in the second quarter of 2008, but soon returned to a downward trajectory. Today, compared to when teen employment peaked in June 2006, over 1 in 4 jobs held by teens, or 25%, has disappeared from the U.S. economy.

By contrast, looking at the overall level of employment, we find that total employment in the United States has been reduced by 1 in 25 jobs, or by roughly 4% below the level recorded in June 2006.

As we've previously demonstrated, the increases in the federal minimum wage are responsible for all teen job loss in 2007 and 88% of all teen job loss through 2008. A recent study confirms much of our previous analysis:

Despite the $1.2 billion in stimulus money the Congress set aside for summer jobs for youth, the summer youth employment rate hit a record low of 29.1 percent - the lowest since World War II, according to a new study that concluded still more federal spending is needed.

The author of the study, Northeastern University labor economist Andy Sum, had predicted shortly after the Recovery Act was passed that employment for 16- to 19-year-olds for June and July would be 32.1 percent.

Now, Sum says, without further federal action, things are not expected to get better anytime soon.

The study determined that the length and severity of the 2007-2009 recession were to blame for the record low youth employment this summer, and the fact that more adults were willing to compete with teens for a wide array of entry level positions. It also found that rising federal and state minimum wages "appear to have influenced employers to scale back the hiring of teens, especially those with limited work experience, and rely instead on more experienced workers."

Meanwhile, lobbyists are advocating for relief from the federal government:

Jonathan Larsen, policy associate at the Washington, D.C.- based National Youth Employment Coalition, said there will be a need for federal action even when the economy turns around.

"The only alternative at this point, because we don't expect any recovery in employment rates for teens and young adults, is to have some kind of federally funded employment program," Larsen said. "If we want young people to have work experience, we need to invest federal money."

As might be expected, the proposals being floated about for consideration fall far short of addressing the real causes of the teen job loss crisis, as they "target" certain favored political constituencies rather than the larger problem affecting far more people. That larger problem is the result of a minimum wage set far too high with respect to the level of wages needed to maximize total employment levels in today's economy, which is contributing to the overall shortage of job opportunities for teens and young adults, who disproportionately make up the number of people who earn these low wages:

The 1970s would be the last time the federal minimum wage was set far too high. The tax credits and wage subsidies mentioned above were largely ineffective in addressing high teen unemployment rates. Instead, it took the sustained corrosive effects of inflation without additional minimum wage increases to erode the excessive mandated minimum wage level back to where employers would be willing to hire unskilled teens. Given today's deflationary expectations coursing through the economy, that approach is not a viable option for a speedy recovery in teen employment levels.

At least Sum recognizes the consequences of not correcting the situation:

"In the absence of any comprehensive new set of strategies to dramatically boost teen employment, the labor market for teens will continue to deteriorate over the next few years with adverse consequences for their future employability and earnings," the study stated.

Indeed. If only the politicians currently running the show in Washington, the lobbyists seeking favors for special interests at the expense of the whole public interest and the authors of studies that fail to fully account for the causes of the teen employment crisis cared more. Even a little.