Going by the evidence we have, we believe that our model where changes in expectations of the future rate of dividend growth directly drives a bit over 70% of what we see in how stock prices change over time. The rest of the time, stock prices are significantly influenced by what we've described as noise, which may either raise or lower stock prices with respect to the level provided by their underlying dividends per share. It's this combination of noise and signal that describes our view of the stock market.

While noise is always present to some degree in the stock market, from time to time, it makes a significant contribution to the level of stock prices. Much of the time, noise is generated by investor speculation, sometimes by events in other markets, which accounts for much of the day-to-day variation we see in stock prices. But sometimes, larger forces are at work. We believe we see those larger forces at work in today's stock market. 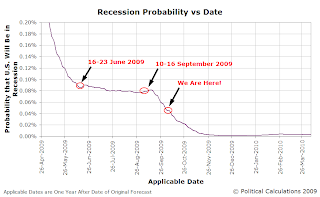 Since our recession prediction model incorporates both the Federal Funds Rate and the spread between the yields of the 10-Year and 3-Month U.S. Constant Maturity Treasuries, we hypothesized that changes in these factors were responsible for happened a year later in the stock market. After reviewing the data, we narrowed those options down to changes in the U.S. Treasury yield curve.

We believe this would be the result of the unwinding of the investment hedging strategies of bond and stock options traders. Here, a sudden narrowing of the treasury yield curve would correspond to a strategy of investing more heavily in stock and stock options at the time. A year later, with the expiration of the associated options contracts, that results in more shares of stock coming into the stock market than might otherwise be present, which acts to depress stock prices.

Likewise, the reverse would seem to be true for situations where the treasury yield curve suddenly steepens. A surge into Treasuries might well result in an increase in stock prices a year later, as the notes mature and the associated funds are reallocated according to the market situation of the day.

Why does that matter for today's stock market? Well, guess what happened a year ago that would be unwinding today.... 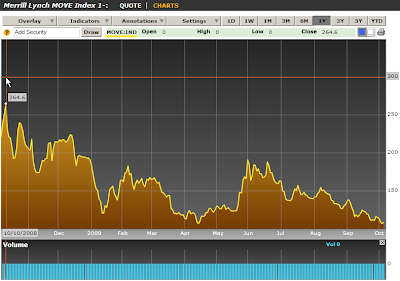 The Merrill Option Volatility Estimate (or MOVE) index shown above from 6 October 2008 through 6 October 2009 is "a yield curve weighted index of the normalized implied volatility on 1-month Treasury options. It is the weighted average of volatilities on the CT2, CT5, CT10, and CT30," which provides a really good picture of the change in volume for money going into U.S. Treasuries (HT: Tyler Durden).

What we see is a massive surge into treasuries a year ago, which coincides with the catastrophic meltdown of the financial sector at that time. A year later, much less money is going in, which suggests that money is coming out from this source. Recent reports have indicated that much of this money is flowing to corporate bonds and stocks.

What we do know about noisy events is this: like President Barack Obama's promises, they all have expiration dates. Our next chart might very well suggest where the actions of last year's stock and bond investors will result in the present potentially-noise driven increase in stock prices might come to an end. 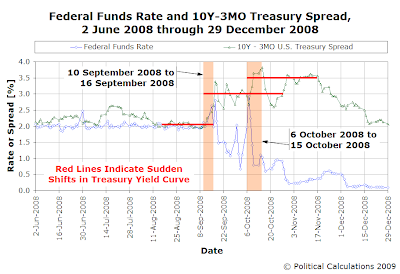 In the interest of disclosure, we should note that we've identified two possible outcomes for the level of stock prices based upon how investors might reasonably project their value, without considering the effects of this source of noise, one of which is an upward trajectory. We have also observed that the future rate of dividend growth, as predicted by dividend futures, has seen some small upticks in the past week, although these have not been of a level that would yet cause us to alter either of our forecast trajectories for the S&P 500 for the month.

We're also presently sitting out from the stock, bond and treasury markets altogether. We're just really curious to see how it all breaks!